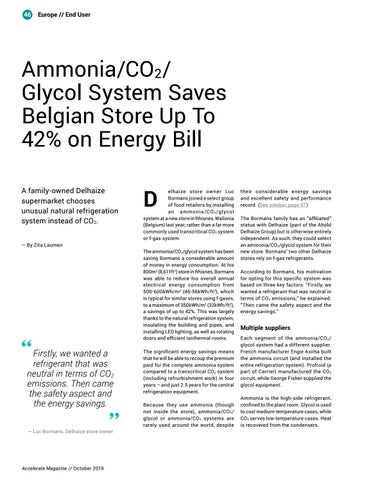 — By Zita Laumen The ammonia/CO2 /glycol system has been saving Bormans a considerable amount of money in energy consumption. At his 800m2 (8,611ft2) store in Rhisnes, Bormans was able to reduce his overall annual electrical energy consumption from 500-600kWh/m2 (46-56kWh/ft 2), which is typical for similar stores using f-gases, to a maximum of 350kWh/m2 (32kWh/ft2), a savings of up to 42%. This was largely thanks to the natural refrigeration system, insulating the building and pipes, and installing LED lighting, as well as rotating doors and efficient isothermal rooms.

Firstly, we wanted a refrigerant that was neutral in terms of CO2 emissions. Then came the safety aspect and the energy savings. — Luc Bormans, Delhaize store owner

The significant energy savings means that he will be able to recoup the premium paid for the complete ammonia system compared to a transcritical CO 2 system (including refrurbishment work) in four years – and just 2.5 years for the central refrigeration equipment. Because they use ammonia (though not inside the store), ammonia/CO 2 / glycol or ammonia/CO 2 systems are rarely used around the world, despite

their considerable energy savings and excellent safety and performance record. (See sidebar, page 47.) The Bormans family has an “affiliated” status with Delhaize (part of the Ahold Delhaize Group) but is otherwise entirely independent. As such, they could select an ammonia/CO 2 /glycol system for their new store. Bormans’ two other Delhaize stores rely on f-gas refrigerants. According to Bormans, his motivation for opting for this specific system was based on three key factors: “Firstly, we wanted a refrigerant that was neutral in terms of CO 2 emissions,” he explained. “Then came the safety aspect and the energy savings.”

Multiple suppliers Each segment of the ammonia/CO 2 / glycol system had a different supplier. French manufacturer Engie Axima built the ammonia circuit (and installed the entire refrigeration system). Profroid (a part of Carrier) manufactured the CO 2 circuit, while George Fisher supplied the glycol equipment. Ammonia is the high-side refrigerant, confined to the plant room. Glycol is used to cool medium-temperature cases, while CO 2 serves low-temperature cases. Heat is recovered from the condensers.

With special coverage of air conditioning, the October 2019 edition of Accelerate Magazine examines the global effort to improve the efficiency of room ACs (in part through the use of propane refrigerant) so that the upsurge of comfort cooling in a warming world doesn’t exacerbate the climate crisis. Also in the October 2019 issue: regional articles on: Weis Markets’ transcritical CO2 system maintaining efficiency; a Belgian Delhaize store cutting its energy bills with a ammonia/CO2 /glycol system; a massive transcritical system at a produce store in South Africa; an Australian IGA store’s integrated refrigeration-AC-heating CO2 system; Japan’s largest warehouse using ammonia/CO2 technology; the Philippine’s first R290 store; and Spar’s use of R290 in China. Global trend articles include a review of World Ozone Day and a survey of attitudes toward climate change. 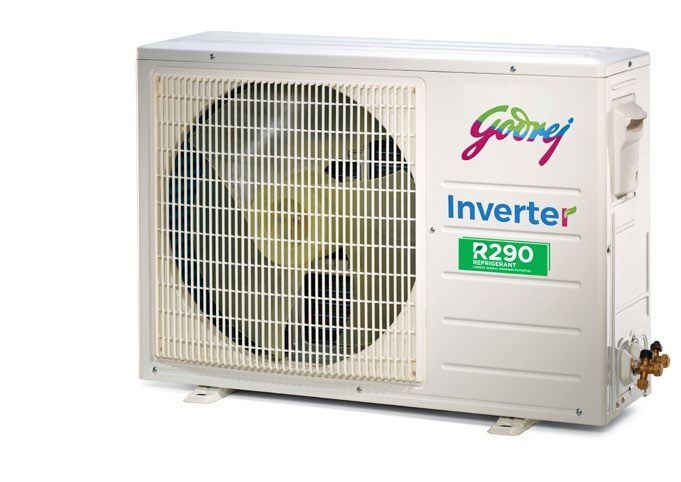 How do we cool a warming world (without without making it warmer)?

Accelerate Magazine examines the global effort to improve the efficiency of room ACs (in part through the use of propane refrigerant) so that the upsurge of comfort cooling in a warming world doesn’t exacerbate the climate crisis.