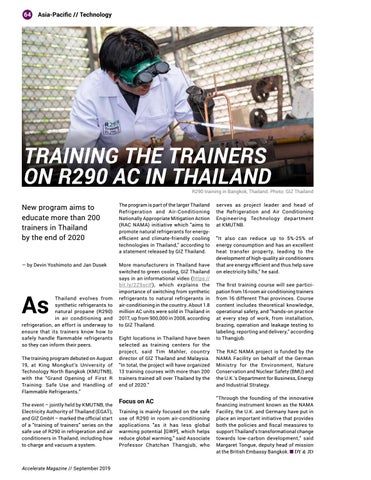 TRAINING THE TRAINERS ON R290 AC IN THAILAND

The program is part of the larger Thailand Refrigeration and Air- Conditioning Nationally Appropriate Mitigation Action (RAC NAMA) initiative which "aims to promote natural refrigerants for energyefficient and climate-friendly cooling technologies in Thailand," according to a statement released by GIZ Thailand.

— by Devin Yoshimoto and Jan Dusek

More manufacturers in Thailand have switched to green cooling, GIZ Thailand says in an informational video (https:// bit.ly/2Z9scIf ), which explains the importance of switching from synthetic refrigerants to natural refrigerants in air-conditioning in the country. About 1.8 million AC units were sold in Thailand in 2017, up from 900,000 in 2008, according to GIZ Thailand.

Thailand evolves from synthetic refrigerants to natural propane (R290) in air conditioning and refrigeration, an effort is underway to ensure that its trainers know how to safely handle flammable refrigerants so they can inform their peers. The training program debuted on August 19, at King Mongkut’s University of Technology North Bangkok (KMUTNB), with the “Grand Opening of First R Training: Safe Use and Handling of Flammable Refrigerants.” The event – jointly held by KMUTNB, the Electricity Authority of Thailand (EGAT), and GIZ GmbH – marked the official start of a "training of trainers" series on the safe use of R290 in refrigeration and air conditioners in Thailand, including how to charge and vacuum a system.

Eight locations in Thailand have been selected as training centers for the project, said Tim Mahler, countr y director of GIZ Thailand and Malaysia. "In total, the project will have organized 13 training courses with more than 200 trainers trained all over Thailand by the end of 2020."

Focus on AC Training is mainly focused on the safe use of R290 in room air-conditioning applications "as it has less global warming potential [GWP], which helps reduce global warming," said Associate Professor Chatchan Thangjub, who

serves as project leader and head of the Refrigeration and Air Conditioning Engineering Technology depar tment at KMUTNB. "It also can reduce up to 5%-25% of energy consumption and has an excellent heat transfer property, leading to the development of high-quality air conditioners that are energy efficient and thus help save on electricity bills,” he said. The first training course will see participation from 16 room air conditioning trainers from 16 different Thai provinces. Course content includes theoretical knowledge, operational safety, and "hands-on practice at every step of work, from installation, brazing, operation and leakage testing to labeling, reporting and delivery," according to Thangjub. The RAC NAMA project is funded by the NAMA Facility on behalf of the German Ministry for the Environment, Nature Conservation and Nuclear Safety (BMU) and the U.K.’s Department for Business, Energy and Industrial Strategy. “Through the founding of the innovative financing instrument known as the NAMA Facility, the U.K. and Germany have put in place an important initiative that provides both the policies and fiscal measures to support Thailand's transformational change towards low-carbon development," said Margaret Tongue, deputy head of mission at the British Embassy Bangkok. DY & JD