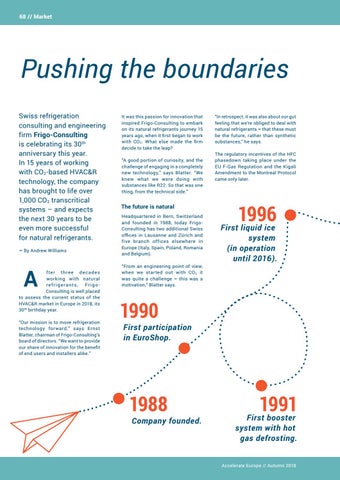 Pushing the boundaries Swiss refrigeration consulting and engineering firm Frigo-Consulting is celebrating its 30 th anniversary this year. In 15 years of working with CO 2 -based HVAC&amp;R technology, the company has brought to life over 1,000 CO 2 transcritical systems – and expects the next 30 years to be even more successful for natural refrigerants. ― By Andrew Williams

f te r th re e d e c a d es working with natural refrigerants, Frigo Consulting is well placed to assess the current status of the HVAC&amp;R market in Europe in 2018, its 30 th birthday year. “Our mission is to move refrigeration technology forward,” says Ernst Blatter, chairman of Frigo-Consulting’s board of directors. “We want to provide our share of innovation for the benefit of end users and installers alike.”

It was this passion for innovation that inspired Frigo-Consulting to embark on its natural refrigerants journey 15 years ago, when it first began to work with CO 2 . What else made the firm decide to take the leap? “A good portion of curiosity, and the challenge of engaging in a completely new technology,” says Blatter. “We knew what we were doing with substances like R22. So that was one thing, from the technical side.”

The future is natural Headquartered in Bern, Switzerland and founded in 1988, today FrigoConsulting has two additional Swiss offices in Lausanne and Zürich and five branch offices elsewhere in Europe (Italy, Spain, Poland, Romania and Belgium). “From an engineering point of view, when we started out with CO 2 it was quite a challenge – this was a motivation,” Blatter says.

“In retrospect, it was also about our gut feeling that we’re obliged to deal with natural refrigerants – that these must be the future, rather than synthetic substances,” he says. The regulatory incentives of the HFC phasedown taking place under the EU F-Gas Regulation and the Kigali Amendment to the Montreal Protocol came only later.