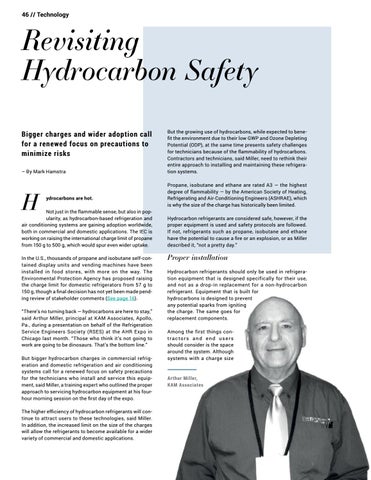 Not just in the flammable sense, but also in popularity, as hydrocarbon-based refrigeration and air conditioning systems are gaining adoption worldwide, both in commercial and domestic applications. The IEC is working on raising the international charge limit of propane from 150 g to 500 g, which would spur even wider uptake. In the U.S., thousands of propane and isobutane self-contained display units and vending machines have been installed in food stores, with more on the way. The Environmental Protection Agency has proposed raising the charge limit for domestic refrigerators from 57 g to 150 g, though a final decision has not yet been made pending review of stakeholder comments (See page 16). “There&#39;s no turning back — hydrocarbons are here to stay,” said Arthur Miller, principal at KAM Associates, Apollo, Pa., during a presentation on behalf of the Refrigeration Service Engineers Society (RSES) at the AHR Expo in Chicago last month. “Those who think it&#39;s not going to work are going to be dinosaurs. That&#39;s the bottom line.” But bigger hydrocarbon charges in commercial refrigeration and domestic refrigeration and air conditioning systems call for a renewed focus on safety precautions for the technicians who install and service this equipment, said Miller, a training expert who outlined the proper approach to servicing hydrocarbon equipment at his fourhour morning session on the first day of the expo.

But the growing use of hydrocarbons, while expected to benefit the environment due to their low GWP and Ozone Depleting Potential (ODP), at the same time presents safety challenges for technicians because of the flammability of hydrocarbons. Contractors and technicians, said Miller, need to rethink their entire approach to installing and maintaining these refrigeration systems. Propane, isobutane and ethane are rated A3 — the highest degree of flammability — by the American Society of Heating, Refrigerating and Air-Conditioning Engineers (ASHRAE), which is why the size of the charge has historically been limited. Hydrocarbon refrigerants are considered safe, however, if the proper equipment is used and safety protocols are followed. If not, refrigerants such as propane, isobutane and ethane have the potential to cause a fire or an explosion, or as Miller described it, “not a pretty day.”

Proper installation Hydrocarbon refrigerants should only be used in refrigeration equipment that is designed specifically for their use, and not as a drop-in replacement for a non-hydrocarbon refrigerant. Equipment that is built for hydrocarbons is designed to prevent any potential sparks from igniting the charge. The same goes for replacement components. Among the first things contrac tors and end users should consider is the space around the system. Although systems with a charge size

The higher efficiency of hydrocarbon refrigerants will continue to attract users to these technologies, said Miller. In addition, the increased limit on the size of the charges will allow the refrigerants to become available for a wider variety of commercial and domestic applications.