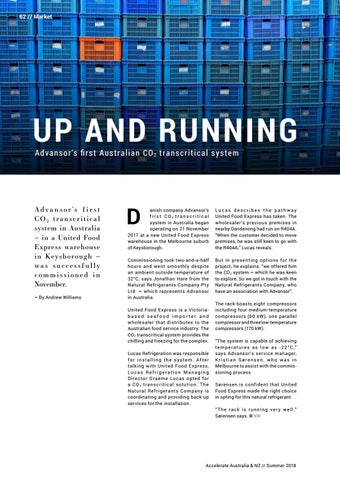 Lucas describes the pathway United Food Express has taken. The wholesaler ’s previous premises in nearby Dandenong had run on R404A. “When the customer decided to move premises, he was still keen to go with the R404A,” Lucas reveals.

Commissioning took two-and-a-half hours and went smoothly despite an ambient outside temperature of 32°C, says Jonathan Hare from the Natural Refrigerants Company Pty Ltd. – which represents Advansor in Australia.

Bu t in p rese ntin g o ptio ns fo r th e project, he explains, “we offered him the CO 2 system – which he was keen to explore. So we got in touch with the Natural Refrigerants Company, who have an association with Advansor”.

The rack boasts eight compressors including four medium-temperature compressors (60 kW ), one parallel compressor and three low-temperature compressors (170 kW). “The system is capable of achieving temperatures as low as -22°C,” says Advansor ’s ser vice manager, Kristian Sørensen, who was in Melbourne to assist with the commissioning process. Sørensen is confident that United Food Express made the right choice in opting for this natural refrigerant. “ The rack is running ver y well,” Sørensen says. AW

DRAKES: PIONEERING CO2 IN AUSTRALIA Facing some of the highest energy costs in the world in its South Australia home, Drakes Supermarkets –...

DRAKES: PIONEERING CO2 IN AUSTRALIA Facing some of the highest energy costs in the world in its South Australia home, Drakes Supermarkets –...