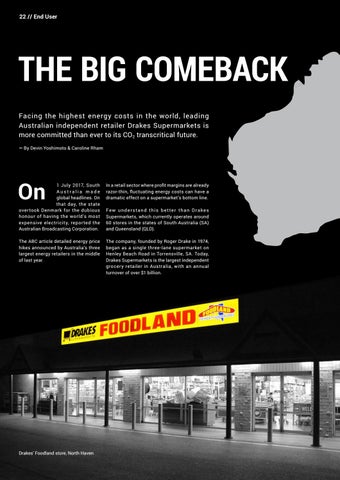 THE BIG COMEBACK Facing the highest energy costs in the world, leading Australian independent retailer Drakes Supermarkets is more committed than ever to its CO 2 transcritical future. ― By Devin Yoshimoto &amp; Caroline Rham

1 July 2017, South Australia made global headlines. On that day, the state over took Denmark for the dubious honour of having the world&#39;s most expensive electricity, repor ted the Australian Broadcasting Corporation.

In a retail sector where profit margins are already razor-thin, fluctuating energy costs can have a dramatic effect on a supermarket’s bottom line.

The company, founded by Roger Drake in 1974, began as a single three-lane supermarket on Henley Beach Road in Torrensville, SA. Today, Drakes Supermarkets is the largest independent grocer y retailer in Australia, with an annual turnover of over $1 billion.

DRAKES: PIONEERING CO2 IN AUSTRALIA Facing some of the highest energy costs in the world in its South Australia home, Drakes Supermarkets – Australia’s largest independent grocery retailer – is more committed than ever to its natural refrigerant future.