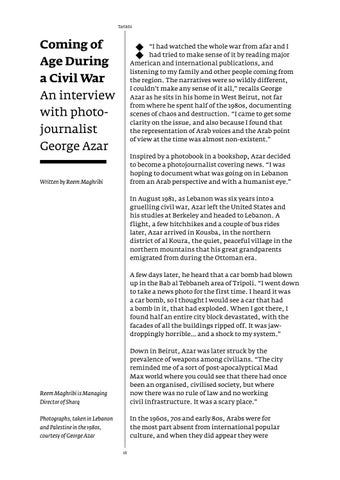 “I had watched the whole war from afar and I had tried to make sense of it by reading major American and international publications, and listening to my family and other people coming from the region. The narratives were so wildly different, I couldn’t make any sense of it all,” recalls George Azar as he sits in his home in West Beirut, not far from where he spent half of the 1980s, documenting scenes of chaos and destruction. “I came to get some clarity on the issue, and also because I found that the representation of Arab voices and the Arab point of view at the time was almost non-existent.” Inspired by a photobook in a bookshop, Azar decided to become a photojournalist covering news. “I was hoping to document what was going on in Lebanon from an Arab perspective and with a humanist eye.”

In August 1981, as Lebanon was six years into a gruelling civil war, Azar left the United States and his studies at Berkeley and headed to Lebanon. A flight, a few hitchhikes and a couple of bus rides later, Azar arrived in Kousba, in the northern district of al Koura, the quiet, peaceful village in the northern mountains that his great grandparents emigrated from during the Ottoman era. A few days later, he heard that a car bomb had blown up in the Bab al Tebbaneh area of Tripoli. “I went down to take a news photo for the first time. I heard it was a car bomb, so I thought I would see a car that had a bomb in it, that had exploded. When I got there, I found half an entire city block devastated, with the facades of all the buildings ripped off. It was jawdroppingly horrible… and a shock to my system.”

Down in Beirut, Azar was later struck by the prevalence of weapons among civilians. “The city reminded me of a sort of post-apocalyptical Mad Max world where you could see that there had once been an organised, civilised society, but where now there was no rule of law and no working civil infrastructure. It was a scary place.”

Photographs, taken in Lebanon and Palestine in the 1980s, courtesy of George Azar

In the 1960s, 70s and early 80s, Arabs were for the most part absent from international popular culture, and when they did appear they were 16 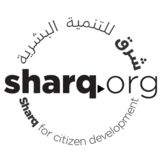