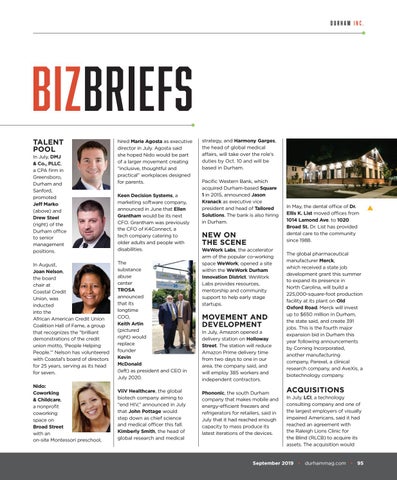 BIZBRIEFS In July, DMJ & Co., PLLC, a CPA firm in Greensboro, Durham and Sanford, promoted Jeff Marko (above) and Drew Steel (right) of the Durham office to senior management positions.

hired Marie Agosta as executive director in July. Agosta said she hoped Nido would be part of a larger movement creating “inclusive, thoughtful and practical” workplaces designed for parents. Keen Decision Systems, a marketing software company, announced in June that Ellen Grantham would be its next CFO. Grantham was previously the CFO of K4Connect, a tech company catering to older adults and people with disabilities.

In August, Joan Nelson, the board chair at Coastal Credit Union, was inducted into the African American Credit Union Coalition Hall of Fame, a group that recognizes the “brilliant demonstrations of the credit union motto, ‘People Helping People.’” Nelson has volunteered with Coastal’s board of directors for 25 years, serving as its head for seven.

ViiV Healthcare, the global biotech company aiming to “end HIV,” announced in July that John Pottage would step down as chief science and medical officer this fall. Kimberly Smith, the head of global research and medical

strategy, and Harmony Garges, the head of global medical affairs, will take over the role’s duties by Oct. 10 and will be based in Durham. Pacific Western Bank, which acquired Durham-based Square 1 in 2015, announced Jason Kranack as executive vice president and head of Tailored Solutions. The bank is also hiring in Durham.

In July, Amazon opened a delivery station on Holloway Street. The station will reduce Amazon Prime delivery time from two days to one in our area, the company said, and will employ 385 workers and independent contractors. Phononic, the south Durham company that makes mobile and energy-efficient freezers and refrigerators for retailers, said in July that it had reached enough capacity to mass produce its latest iterations of the devices.

In May, the dental office of Dr. Ellis K. List moved offices from 1014 Lamond Ave. to 1020 Broad St. Dr. List has provided dental care to the community since 1988. The global pharmaceutical manufacturer Merck, which received a state job development grant this summer to expand its presence in North Carolina, will build a 225,000-square-foot production facility at its plant on Old Oxford Road. Merck will invest up to $650 million in Durham, the state said, and create 391 jobs. This is the fourth major expansion bid in Durham this year following announcements by Corning Incorporated, another manufacturing company, Parexel, a clinical research company, and AveXis, a biotechnology company.

In July, LCI, a technology consulting company and one of the largest employers of visually impaired Americans, said it had reached an agreement with the Raleigh Lions Clinic for the Blind (RLCB) to acquire its assets. The acquisition would