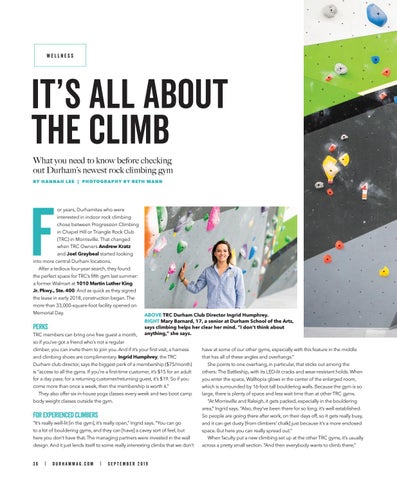 or years, Durhamites who were interested in indoor rock climbing chose between Progression Climbing in Chapel Hill or Triangle Rock Club (TRC) in Morrisville. That changed when TRC Owners Andrew Kratz and Joel Graybeal started looking into more central Durham locations. After a tedious four-year search, they found the perfect space for TRC’s fifth gym last summer: a former Walmart at 1010 Martin Luther King Jr. Pkwy., Ste. 400. And as quick as they signed the lease in early 2018, construction began. The more than 33,000-square-foot facility opened on Memorial Day.

ABOVE TRC Durham Club Director Ingrid Humphrey. RIGHT Mary Barnard, 17, a senior at Durham School of the Arts, says climbing helps her clear her mind. “I don’t think about anything,” she says.

TRC members can bring one free guest a month, so if you’ve got a friend who’s not a regular climber, you can invite them to join you. And if it’s your first visit, a harness and climbing shoes are complimentary. Ingrid Humphrey, the TRC Durham club director, says the biggest perk of a membership ($75/month) is “access to all the gyms. If you’re a first-time customer, it’s $15 for an adult for a day pass; for a returning customer/returning guest, it’s $19. So if you come more than once a week, then the membership is worth it.” They also offer six in-house yoga classes every week and two boot camp body weight classes outside the gym.

“It’s really well-lit [in the gym], it’s really open,” Ingrid says. “You can go to a lot of bouldering gyms, and they can [have] a cavey sort of feel, but here you don’t have that. The managing partners were invested in the wall design. And it just lends itself to some really interesting climbs that we don’t 36

have at some of our other gyms, especially with this feature in the middle that has all of these angles and overhangs.” She points to one overhang, in particular, that sticks out among the others: The Battleship, with its LED-lit cracks and wear-resistant holds. When you enter the space, Walltopia glows in the center of the enlarged room, which is surrounded by 16-foot tall bouldering walls. Because the gym is so large, there is plenty of space and less wait time than at other TRC gyms. “At Morrisville and Raleigh, it gets packed, especially in the bouldering area,” Ingrid says. “Also, they’ve been there for so long, it’s well established. So people are going there after work, on their days off, so it gets really busy, and it can get dusty [from climbers’ chalk] just because it’s a more enclosed space. But here you can really spread out.” When faculty put a new climbing set up at the other TRC gyms, it’s usually across a pretty small section. “And then everybody wants to climb there,”