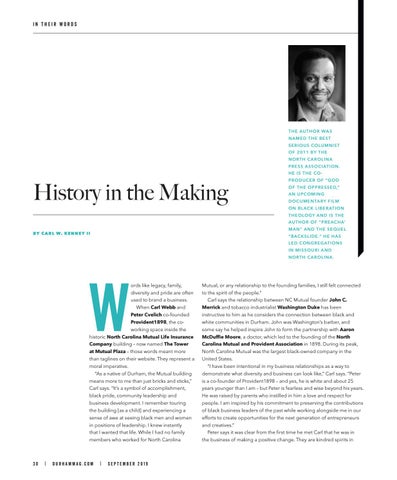 History in the Making

OF THE OPP RE SSE D,” AN UP COMING

ords like legacy, family, diversity and pride are often used to brand a business. When Carl Webb and Peter Cvelich co-founded Provident1898, the coworking space inside the historic North Carolina Mutual Life Insurance Company building – now named The Tower at Mutual Plaza – those words meant more than taglines on their website. They represent a moral imperative. “As a native of Durham, the Mutual building means more to me than just bricks and sticks,” Carl says. “It’s a symbol of accomplishment, black pride, community leadership and business development. I remember touring the building [as a child] and experiencing a sense of awe at seeing black men and women in positions of leadership. I knew instantly that I wanted that life. While I had no family members who worked for North Carolina

Mutual, or any relationship to the founding families, I still felt connected to the spirit of the people.” Carl says the relationship between NC Mutual founder John C. Merrick and tobacco industrialist Washington Duke has been instructive to him as he considers the connection between black and white communities in Durham. John was Washington’s barber, and some say he helped inspire John to form the partnership with Aaron McDuffie Moore, a doctor, which led to the founding of the North Carolina Mutual and Provident Association in 1898. During its peak, North Carolina Mutual was the largest black-owned company in the United States. “I have been intentional in my business relationships as a way to demonstrate what diversity and business can look like,” Carl says. “Peter is a co-founder of Provident1898 – and yes, he is white and about 25 years younger than I am – but Peter is fearless and wise beyond his years. He was raised by parents who instilled in him a love and respect for people. I am inspired by his commitment to preserving the contributions of black business leaders of the past while working alongside me in our efforts to create opportunities for the next generation of entrepreneurs and creatives.” Peter says it was clear from the first time he met Carl that he was in the business of making a positive change. They are kindred spirits in