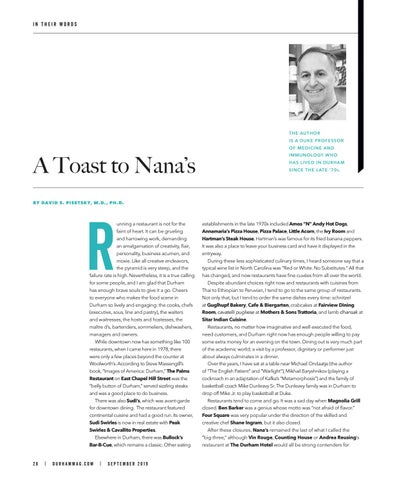 A Toast to Nana’s

unning a restaurant is not for the faint of heart. It can be grueling and harrowing work, demanding an amalgamation of creativity, flair, personality, business acumen, and moxie. Like all creative endeavors, the pyramid is very steep, and the failure rate is high. Nevertheless, it is a true calling for some people, and I am glad that Durham has enough brave souls to give it a go. Cheers to everyone who makes the food scene in Durham so lively and engaging: the cooks, chefs (executive, sous, line and pastry), the waiters and waitresses, the hosts and hostesses, the maître d’s, bartenders, sommeliers, dishwashers, managers and owners. While downtown now has something like 100 restaurants, when I came here in 1978, there were only a few places beyond the counter at Woolworth’s. According to Steve Massengill’s book, “Images of America: Durham,” The Palms Restaurant on East Chapel Hill Street was the “belly button of Durham,” served sizzling steaks and was a good place to do business. There was also Sudi’s, which was avant-garde for downtown dining. The restaurant featured continental cuisine and had a good run. Its owner, Sudi Swirles is now in real estate with Peak Swirles & Cavallito Properties. Elsewhere in Durham, there was Bullock’s Bar-B-Cue, which remains a classic. Other eating

establishments in the late 1970s included Amos “N” Andy Hot Dogs, Annamaria’s Pizza House, Pizza Palace, Little Acorn, the Ivy Room and Hartman’s Steak House. Hartman’s was famous for its fried banana peppers. It was also a place to leave your business card and have it displayed in the entryway. During these less sophisticated culinary times, I heard someone say that a typical wine list in North Carolina was “Red or White. No Substitutes.” All that has changed, and now restaurants have fine cuvées from all over the world. Despite abundant choices right now and restaurants with cuisines from Thai to Ethiopian to Peruvian, I tend to go to the same group of restaurants. Not only that, but I tend to order the same dishes every time: schnitzel at Guglhupf Bakery, Cafe & Biergarten, crabcakes at Fairview Dining Room, cavatelli pugliese at Mothers & Sons Trattoria, and lamb dhansak at Sitar Indian Cuisine. Restaurants, no matter how imaginative and well executed the food, need customers, and Durham right now has enough people willing to pay some extra money for an evening on the town. Dining out is very much part of the academic world; a visit by a professor, dignitary or performer just about always culminates in a dinner. Over the years, I have sat at a table near Michael Ondaatje (the author of “The English Patient” and “Warlight”), Mikhail Baryshnikov (playing a cockroach in an adaptation of Kafka’s “Metamorphosis”) and the family of basketball coach Mike Dunleavy Sr. The Dunleavy family was in Durham to drop off Mike Jr. to play basketball at Duke. Restaurants tend to come and go. It was a sad day when Magnolia Grill closed. Ben Barker was a genius whose motto was “not afraid of flavor.” Four Square was very popular under the direction of the skilled and creative chef Shane Ingram, but it also closed. After these closures, Nana’s remained the last of what I called the “big three,” although Vin Rouge, Counting House or Andrea Reusing’s restaurant at The Durham Hotel would all be strong contenders for