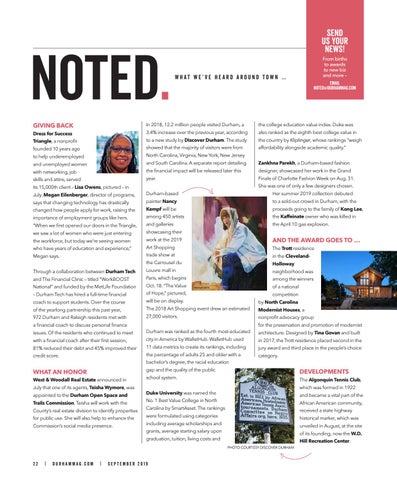 Send us your news! From births to awards to new biz and more –

to a new study by Discover Durham. The study

the country by Kliplinger, whose rankings “weigh

the financial impact will be released later this

3.4% increase over the previous year, according

showed that the majority of visitors were from

changed how people apply for work, raising the

“When we first opened our doors in the Triangle,

Through a collaboration between Durham Tech

National” and funded by the MetLife Foundation

coach to support students. Over the course

will be on display.

972 Durham and Raleigh residents met with

issues. Of the residents who continued to meet

Durham was ranked as the fourth most-educated

81% reduced their debt and 45% improved their

11 data metrics to create its rankings, including

its 15,000th client – Lisa Owens, pictured – in says that changing technology has drastically

we saw a lot of women who were just entering

who have years of education and experience,”

to a sold-out crowd in Durham, with the

proceeds going to the family of Kong Lee, the Kaffeinate owner who was killed in the April 10 gas explosion.

AND THE AWARD GOES TO … The Trott residence in the ClevelandHolloway

of the yearlong partnership this past year,

among the winners of a national competition

the percentage of adults 25 and older with a

gap and the quality of the public

appointed to the Durham Open Space and

Duke University was named the

Carolina by SmartAsset. The rankings

including average scholarships and

July that one of its agents, Teisha Wymore, was Trails Commission. Teisha will work with the

No. 1 Best Value College in North

for public use. She will also help to enhance the

with a financial coach after their first session,

designer, showcased her work in the Grand

and The Financial Clinic – titled “WorkBOOST

She was one of only a few designers chosen.

also ranked as the eighth best college value in

for the preservation and promotion of modernist architecture. Designed by Tina Govan and built

in 2017, the Trott residence placed second in the jury award and third place in the people’s choice category.

The Algonquin Tennis Club, which was formed in 1922

and became a vital part of the African American community, received a state highway

historical marker, which was

unveiled in August, at the site

of its founding, now the W.D.