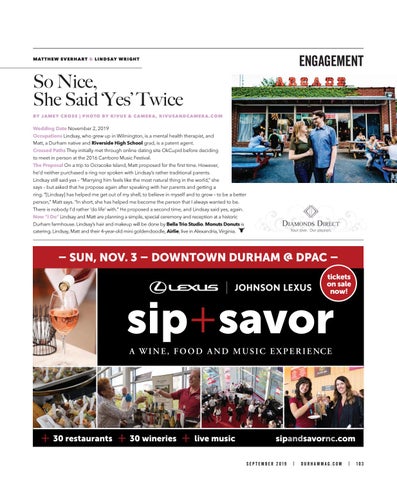 Wedding Date November 2, 2019 Occupations Lindsay, who grew up in Wilmington, is a mental health therapist, and Matt, a Durham native and Riverside High School grad, is a patent agent. Crossed Paths They initially met through online dating site OkCupid before deciding to meet in person at the 2016 Carrboro Music Festival. The Proposal On a trip to Ocracoke Island, Matt proposed for the first time. However, he’d neither purchased a ring nor spoken with Lindsay’s rather traditional parents. Lindsay still said yes – “Marrying him feels like the most natural thing in the world,” she says – but asked that he propose again after speaking with her parents and getting a ring. “[Lindsay] has helped me get out of my shell, to believe in myself and to grow – to be a better person,” Matt says. “In short, she has helped me become the person that I always wanted to be. There is nobody I’d rather ‘do life’ with.” He proposed a second time, and Lindsay said yes, again. Now “I Do” Lindsay and Matt are planning a simple, special ceremony and reception at a historic Durham farmhouse. Lindsay’s hair and makeup will be done by Bella Trio Studio. Monuts Donuts is catering. Lindsay, Matt and their 4-year-old mini goldendoodle, Airlie, live in Alexandria, Virginia.