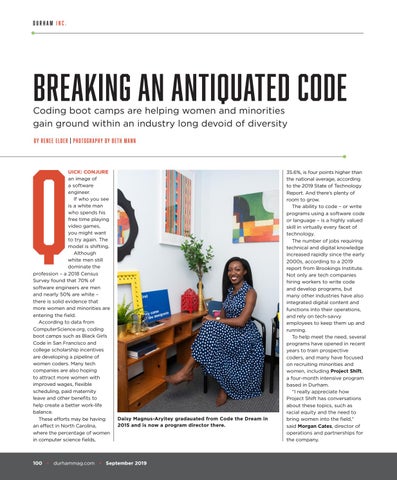 UICK: CONJURE an image of a software engineer. If who you see is a white man who spends his free time playing video games, you might want to try again. The model is shifting. Although white men still dominate the profession – a 2018 Census Survey found that 70% of software engineers are men and nearly 50% are white – there is solid evidence that more women and minorities are entering the field. According to data from ComputerScience.org, coding boot camps such as Black Girls Code in San Francisco and college scholarship incentives are developing a pipeline of women coders. Many tech companies are also hoping to attract more women with improved wages, flexible scheduling, paid maternity leave and other benefits to help create a better work-life balance. These efforts may be having an effect in North Carolina, where the percentage of women in computer science fields,

Daisy Magnus-Aryitey gradauated from Code the Dream in 2015 and is now a program director there.

35.6%, is four points higher than the national average, according to the 2019 State of Technology Report. And there’s plenty of room to grow. The ability to code – or write programs using a software code or language – is a highly valued skill in virtually every facet of technology. The number of jobs requiring technical and digital knowledge increased rapidly since the early 2000s, according to a 2019 report from Brookings Institute. Not only are tech companies hiring workers to write code and develop programs, but many other industries have also integrated digital content and functions into their operations, and rely on tech-savvy employees to keep them up and running. To help meet the need, several programs have opened in recent years to train prospective coders, and many have focused on recruiting minorities and women, including Project Shift, a four-month intensive program based in Durham. “I really appreciate how Project Shift has conversations about these topics, such as racial equity and the need to bring women into the field,” said Morgan Cates, director of operations and partnerships for the company.