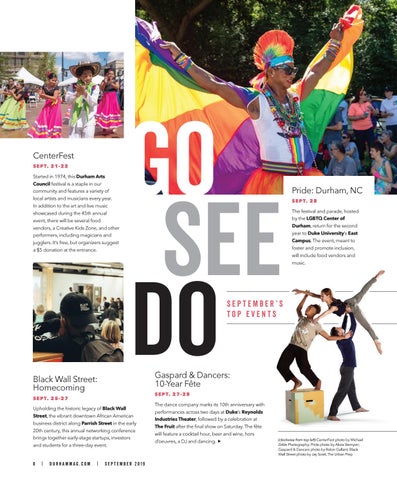 CenterFest SEPT. 2 1 -2 2 Started in 1974, this Durham Arts Council festival is a staple in our community and features a variety of local artists and musicians every year. In addition to the art and live music showcased during the 45th annual event, there will be several food vendors, a Creative Kids Zone, and other performers, including magicians and jugglers. It’s free, but organizers suggest a $5 donation at the entrance.

Pride: Durham, NC S E PT. 28 The festival and parade, hosted by the LGBTQ Center of Durham, return for the second year to Duke University’s East Campus. The event, meant to foster and promote inclusion, will include food vendors and music.

The dance company marks its 10th anniversary with performances across two days at Duke’s Reynolds Industries Theater, followed by a celebration at The Fruit after the final show on Saturday. The fête will feature a cocktail hour, beer and wine, hors d’oeuvres, a DJ and dancing. 