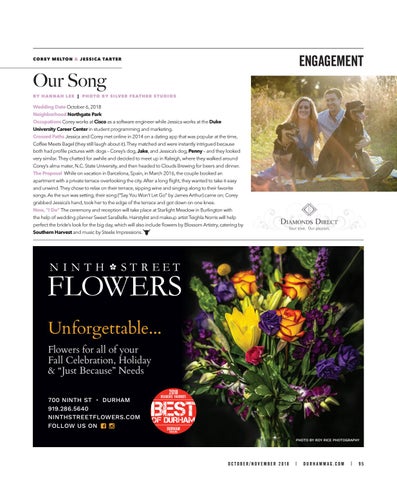 Wedding Date October 6, 2018 Neighborhood Northgate Park Occupations Corey works at Cisco as a software engineer while Jessica works at the Duke University Career Center in student programming and marketing. Crossed Paths Jessica and Corey met online in 2014 on a dating app that was popular at the time, Coffee Meets Bagel (they still laugh about it). They matched and were instantly intrigued because both had profile pictures with dogs – Corey’s dog, Jake, and Jessica’s dog, Penny – and they looked very similar. They chatted for awhile and decided to meet up in Raleigh, where they walked around

Corey’s alma mater, N.C. State University, and then headed to Clouds Brewing for beers and dinner. The Proposal While on vacation in Barcelona, Spain, in March 2016, the couple booked an apartment with a private terrace overlooking the city. After a long flight, they wanted to take it easy and unwind. They chose to relax on their terrace, sipping wine and singing along to their favorite songs. As the sun was setting, their song (“Say You Won’t Let Go” by James Arthur) came on; Corey grabbed Jessica’s hand, took her to the edge of the terrace and got down on one knee. Now, “I Do” The ceremony and reception will take place at Starlight Meadow in Burlington with the help of wedding planner Sweet SaraBelle. Hairstylist and makeup artist Teighla Norris will help perfect the bride’s look for the big day, which will also include flowers by Blossom Artistry, catering by Southern Harvest and music by Steele Impressions.

Unforgettable... Flowers for all of your Fall Celebration, Holiday & “Just Because” Needs 700 NINTH ST • DURHAM 919.286.5640 NINTHSTREETFLOWERS.COM FOLLOW US ON   PHOTO BY ROY RICE PHOTOGRAPHY