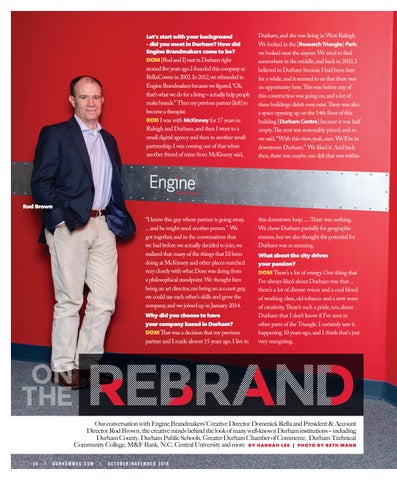 Let’s start with your background – did you meet in Durham? How did Engine Brandmakers come to be? DOM [Rod and I] met in Durham right

around five years ago. I founded this company as Rella:Cowen in 2002. In 2012, we rebranded to Engine Brandmakers because we figured, “Ok, that’s what we do for a living – actually help people make brands.” Then my previous partner [left] to become a therapist. ROD I was with McKinney for 17 years in Raleigh and Durham, and then I went to a small digital agency and then to another small partnership. I was coming out of that when another friend of mine from McKinney said,

Durham, and she was living in West Raleigh. We looked in the [Research Triangle] Park; we looked near the airport. We tried to find somewhere in the middle, and back in 2003, I believed in Durham because I had been here for a while, and it seemed to us that there was an opportunity here. This was before any of this construction was going on, and a lot of these buildings didn’t even exist. There was also a space opening up on the 14th floor of this building [Durham Centre] because it was half empty. The rent was reasonably priced, and so we said, “With this view, yeah, sure. We’ll be in downtown Durham.” We liked it. And back then, there was maybe one deli that was within

“I know this guy whose partner is going away, ... and he might need another person.” We got together, and in the conversations that we had before we actually decided to join, we realized that many of the things that I’d been doing at McKinney and other places matched very closely with what Dom was doing from a philosophical standpoint. We thought him being an art director, me being an account guy, we could use each other’s skills and grow the company, and we joined up in January 2014. Why did you choose to have your company based in Durham? DOM That was a decision that my previous

partner and I made almost 15 years ago. I live in

this downtown loop. … There was nothing. We chose Durham partially for geographic reasons, but we also thought the potential for Durham was so amazing. What about the city drives your passion? DOM There’s a lot of energy. One thing that

I’ve always liked about Durham was that ... there’s a lot of diverse voices and a cool blend of working class, old tobacco and a new wave of creativity. There’s such a pride, too, about Durham that I don’t know if I’ve seen in other parts of the Triangle. I certainly saw it happening 10 years ago, and I think that’s just very energizing.