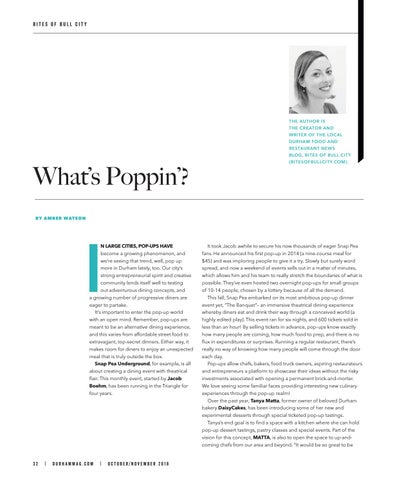 WRITER OF THE LOCAL DURHAM FOOD AND RESTAURANT NEWS

N LARGE CITIES, POP-UPS HAVE become a growing phenomenon, and we’re seeing that trend, well, pop up more in Durham lately, too. Our city’s strong entrepreneurial spirit and creative community lends itself well to testing out adventurous dining concepts, and a growing number of progressive diners are eager to partake. It’s important to enter the pop-up world with an open mind. Remember, pop-ups are meant to be an alternative dining experience, and this varies from affordable street food to extravagant, top-secret dinners. Either way, it makes room for diners to enjoy an unexpected meal that is truly outside the box. Snap Pea Underground, for example, is all about creating a dining event with theatrical flair. This monthly event, started by Jacob Boehm, has been running in the Triangle for four years.

It took Jacob awhile to secure his now thousands of eager Snap Pea fans. He announced his first pop-up in 2014 (a nine-course meal for $45) and was imploring people to give it a try. Slowly but surely word spread, and now a weekend of events sells out in a matter of minutes, which allows him and his team to really stretch the boundaries of what is possible. They’ve even hosted two overnight pop-ups for small groups of 10-14 people, chosen by a lottery because of all the demand. This fall, Snap Pea embarked on its most ambitious pop-up dinner event yet, “The Banquet”– an immersive theatrical dining experience whereby diners eat and drink their way through a conceived world (a highly edited play). This event ran for six nights, and 600 tickets sold in less than an hour! By selling tickets in advance, pop-ups know exactly how many people are coming, how much food to prep, and there is no flux in expenditures or surprises. Running a regular restaurant, there’s really no way of knowing how many people will come through the door each day. Pop-ups allow chefs, bakers, food truck owners, aspiring restaurateurs and entrepreneurs a platform to showcase their ideas without the risky investments associated with opening a permanent brick-and-mortar. We love seeing some familiar faces providing interesting new culinary experiences through the pop-up realm! Over the past year, Tanya Matta, former owner of beloved Durham bakery DaisyCakes, has been introducing some of her new and experimental desserts through special ticketed pop-up tastings. Tanya’s end goal is to find a space with a kitchen where she can hold pop-up dessert tastings, pastry classes and special events. Part of the vision for this concept, MATTA, is also to open the space to up-andcoming chefs from our area and beyond. “It would be so great to be