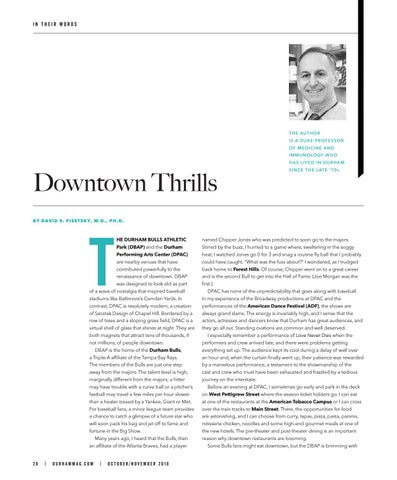 HE DURHAM BULLS ATHLETIC Park (DBAP) and the Durham Performing Arts Center (DPAC) are nearby venues that have contributed powerfully to the renaissance of downtown. DBAP was designed to look old as part of a wave of nostalgia that inspired baseball stadiums like Baltimore’s Camden Yards. In contrast, DPAC is resolutely modern, a creation of Szostak Design of Chapel Hill. Bordered by a row of trees and a sloping grass field, DPAC is a virtual shell of glass that shines at night. They are both magnets that attract tens of thousands, if not millions, of people downtown. DBAP is the home of the Durham Bulls, a Triple-A affiliate of the Tampa Bay Rays. The members of the Bulls are just one step away from the majors. The talent level is high, marginally different from the majors; a hitter may have trouble with a curve ball or a pitcher’s fastball may travel a few miles per hour slower than a heater tossed by a Yankee, Giant or Met. For baseball fans, a minor league team provides a chance to catch a glimpse of a future star who will soon pack his bag and jet off to fame and fortune in the Big Show. Many years ago, I heard that the Bulls, then an affiliate of the Atlanta Braves, had a player

named Chipper Jones who was predicted to soon go to the majors. Stirred by the buzz, I hurried to a game where, sweltering in the soggy heat, I watched Jones go 0 for 3 and snag a routine fly ball that I probably could have caught. “What was the fuss about?” I wondered, as I trudged back home to Forest Hills. Of course, Chipper went on to a great career and is the second Bull to get into the Hall of Fame. (Joe Morgan was the first.) DPAC has none of the unpredictability that goes along with baseball. In my experience of the Broadway productions at DPAC and the performances of the American Dance Festival (ADF), the shows are always grand slams. The energy is invariably high, and I sense that the actors, actresses and dancers know that Durham has great audiences, and they go all out. Standing ovations are common and well deserved. I especially remember a performance of Love Never Dies when the performers and crew arrived late, and there were problems getting everything set up. The audience kept its cool during a delay of well over an hour and, when the curtain finally went up, their patience was rewarded by a marvelous performance, a testament to the showmanship of the cast and crew who must have been exhausted and frazzled by a tedious journey on the interstate. Before an evening at DPAC, I sometimes go early and park in the deck on West Pettigrew Street where the season ticket holders go. I can eat at one of the restaurants at the American Tobacco Campus or I can cross over the train tracks to Main Street. There, the opportunities for food are astonishing, and I can choose from curry, tapas, pizza, pasta, paninis, rotisserie chicken, noodles and some high-end gourmet meals at one of the new hotels. The pre-theater and post-theater dining is an important reason why downtown restaurants are booming. Some Bulls fans might eat downtown, but the DBAP is brimming with