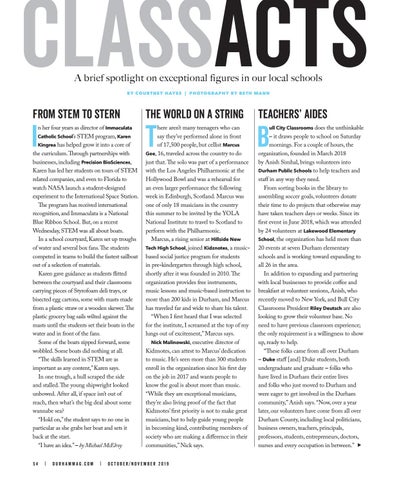 From STEM to Stern

n her four years as director of Immaculata Catholic School’s STEM program, Karen Kingrea has helped grow it into a core of the curriculum. Through partnerships with businesses, including Precision BioSciences, Karen has led her students on tours of STEM related companies, and even to Florida to watch NASA launch a student-designed experiment to the International Space Station. The program has received international recognition, and Immaculata is a National Blue Ribbon School. But, on a recent Wednesday, STEM was all about boats.  In a school courtyard, Karen set up troughs of water and several box fans. The students competed in teams to build the fastest sailboat out of a selection of materials. Karen gave guidance as students flitted between the courtyard and their classrooms carrying pieces of Styrofoam deli trays, or bisected egg cartons, some with masts made from a plastic straw or a wooden skewer. The plastic grocery bag sails wilted against the masts until the students set their boats in the water and in front of the fans. Some of the boats zipped forward, some wobbled. Some boats did nothing at all. “The skills learned in STEM are as important as any content,” Karen says. In one trough, a hull scraped the side and stalled. The young shipwright looked unbowed. After all, if space isn’t out of reach, then what’s the big deal about some wannabe sea? “Hold on,” the student says to no one in particular as she grabs her boat and sets it back at the start.  “I have an idea.” – by Michael McElroy  54

The World on a String

here aren’t many teenagers who can say they’ve performed alone in front of 17,500 people, but cellist Marcus Gee, 16, traveled across the country to do just that. The solo was part of a performance with the Los Angeles Philharmonic at the Hollywood Bowl and was a rehearsal for an even larger performance the following week in Edinburgh, Scotland. Marcus was one of only 18 musicians in the country this summer to be invited by the YOLA National Institute to travel to Scotland to perform with the Philharmonic. Marcus, a rising senior at Hillside New Tech High School, joined Kidznotes, a musicbased social justice program for students in pre-kindergarten through high school, shortly after it was founded in 2010. The organization provides free instruments, music lessons and music-based instruction to more than 200 kids in Durham, and Marcus has traveled far and wide to share his talent. “When I first heard that I was selected for the institute, I screamed at the top of my lungs out of excitement,” Marcus says. Nick Malinowski, executive director of Kidznotes, can attest to Marcus’ dedication to music. He’s seen more than 300 students enroll in the organization since his first day on the job in 2017 and wants people to know the goal is about more than music. “While they are exceptional musicians, they’re also living proof of the fact that Kidznotes’ first priority is not to make great musicians, but to help guide young people in becoming kind, contributing members of society who are making a difference in their communities,” Nick says.

ull City Classrooms does the unthinkable

– it draws people to school on Saturday mornings. For a couple of hours, the organization, founded in March 2018 by Anish Simhal, brings volunteers into Durham Public Schools to help teachers and staff in any way they need. From sorting books in the library to assembling soccer goals, volunteers donate their time to do projects that otherwise may have taken teachers days or weeks. Since its first event in June 2018, which was attended by 24 volunteers at Lakewood Elementary School, the organization has held more than 20 events at seven Durham elementary schools and is working toward expanding to all 26 in the area. In addition to expanding and partnering with local businesses to provide coffee and breakfast at volunteer sessions, Anish, who recently moved to New York, and Bull City Classrooms President Riley Deutsch are also looking to grow their volunteer base. No need to have previous classroom experience; the only requirement is a willingness to show up, ready to help. “These folks came from all over Durham – Duke staff [and] Duke students, both undergraduate and graduate – folks who have lived in Durham their entire lives and folks who just moved to Durham and were eager to get involved in the Durham community,” Anish says. “Now, over a year later, our volunteers have come from all over Durham County, including local politicians, business owners, teachers, principals, professors, students, entrepreneurs, doctors, nurses and every occupation in between.” 