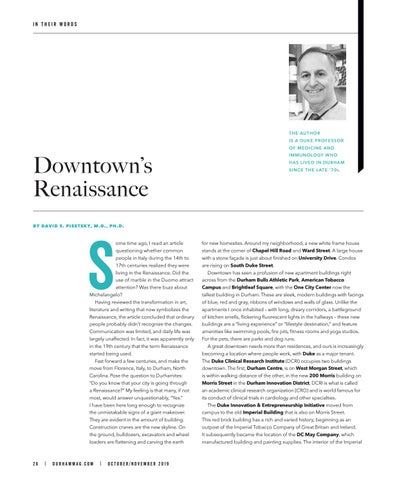 ome time ago, I read an article questioning whether common people in Italy during the 14th to 17th centuries realized they were living in the Renaissance. Did the use of marble in the Duomo attract attention? Was there buzz about Michelangelo? Having reviewed the transformation in art, literature and writing that now symbolizes the Renaissance, the article concluded that ordinary people probably didn’t recognize the changes. Communication was limited, and daily life was largely unaffected. In fact, it was apparently only in the 19th century that the term Renaissance started being used. Fast forward a few centuries, and make the move from Florence, Italy, to Durham, North Carolina. Pose the question to Durhamites: “Do you know that your city is going through a Renaissance?” My feeling is that many, if not most, would answer unquestionably, “Yes.” I have been here long enough to recognize the unmistakable signs of a giant makeover. They are evident in the amount of building. Construction cranes are the new skyline. On the ground, bulldozers, excavators and wheel loaders are flattening and carving the earth

for new homesites. Around my neighborhood, a new white frame house stands at the corner of Chapel Hill Road and Ward Street. A large house with a stone façade is just about finished on University Drive. Condos are rising on South Duke Street. Downtown has seen a profusion of new apartment buildings right across from the Durham Bulls Athletic Park, American Tobacco Campus and Brightleaf Square, with the One City Center now the tallest building in Durham. These are sleek, modern buildings with facings of blue, red and gray, ribbons of windows and walls of glass. Unlike the apartments I once inhabited – with long, dreary corridors, a battleground of kitchen smells, flickering fluorescent lights in the hallways – these new buildings are a “living experience” or “lifestyle destination,” and feature amenities like swimming pools, fire pits, fitness rooms and yoga studios. For the pets, there are parks and dog runs. A great downtown needs more than residences, and ours is increasingly becoming a location where people work, with Duke as a major tenant. The Duke Clinical Research Institute (DCRI) occupies two buildings downtown. The first, Durham Centre, is on West Morgan Street, which is within walking distance of the other, in the new 200 Morris building on Morris Street in the Durham Innovation District. DCRI is what is called an academic clinical research organization (CRO) and is world famous for its conduct of clinical trials in cardiology and other specialties. The Duke Innovation & Entrepreneurship Initiative moved from campus to the old Imperial Building that is also on Morris Street. This red brick building has a rich and varied history, beginning as an outpost of the Imperial Tobacco Company of Great Britain and Ireland. It subsequently became the location of the DC May Company, which manufactured building and painting supplies. The interior of the Imperial