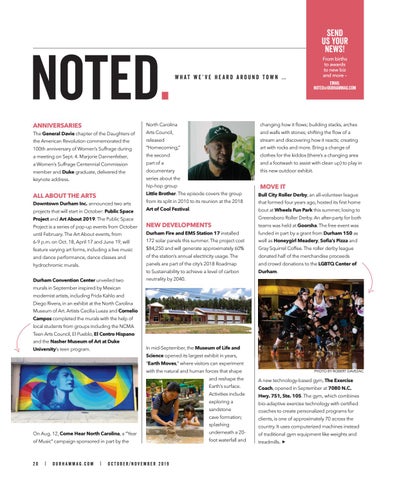 From births to awards to new biz and more – Email noted@durhammag.com

the American Revolution commemorated the

stream and discovering how it reacts; creating

a meeting on Sept. 4. Marjorie Dannenfelser,

member and Duke graduate, delivered the

The General Davie chapter of the Daughters of

and walls with stones; shifting the flow of a

100th anniversary of Women’s Suffrage during

ALL ABOUT THE ARTS

projects that will start in October: Public Space

Project is a series of pop-up events from October

and dance performance, dance classes and

of the station’s annual electricity usage. The

art with rocks and more. Bring a change of

clothes for the kiddos (there’s a changing area

and a footwash to assist with clean up) to play in this new outdoor exhibit.

Project and Art About 2019. The Public Space

that formed four years ago, hosted its first home bout at Wheels Fun Park this summer, losing to

until February. The Art About events, from

panels are part of the city’s 2018 Roadmap

to Sustainability to achieve a level of carbon

Greensboro Roller Derby. An after-party for both teams was held at Goorsha. The free event was funded in part by a grant from Durham 150 as well as Honeygirl Meadery, Sofia’s Pizza and Gray Squirrel Coffee. The roller derby league donated half of the merchandise proceeds

and crowd donations to the LGBTQ Center of Durham.

murals in September inspired by Mexican

modernist artists, including Frida Kahlo and

Diego Rivera, in an exhibit at the North Carolina

Museum of Art. Artists Cecilia Lueza and Cornelio Campos completed the murals with the help of

local students from groups including the NCMA

In mid-September, the Museum of Life and Science opened its largest exhibit in years,

“Earth Moves,” where visitors can experiment with the natural and human forces that shape

and reshape the Earth’s surface.

Activities include exploring a sandstone

cave formation; splashing On Aug. 12, Come Hear North Carolina, a “Year of Music” campaign sponsored in part by the

A new technology-based gym, The Exercise Coach, opened in September at 7080 N.C.

Hwy. 751, Ste. 105. The gym, which combines bio-adaptive exercise technology with certified coaches to create personalized programs for clients, is one of approximately 70 across the

country. It uses computerized machines instead of traditional gym equipment like weights and treadmills. 