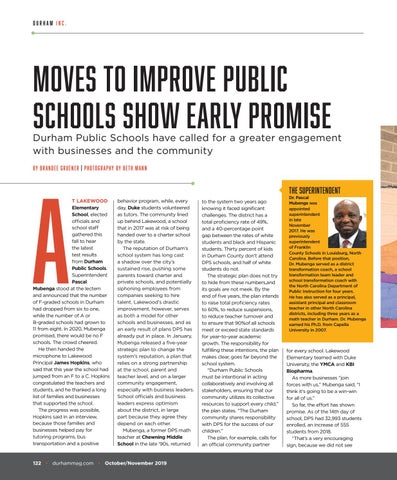 T LAKEWOOD Elementary School, elected officials and school staff gathered this fall to hear the latest test results from Durham Public Schools. Superintendent Pascal Mubenga stood at the lectern and announced that the number of F-graded schools in Durham had dropped from six to one, while the number of A or B-graded schools had grown to 11 from eight. In 2020, Mubenga promised, there would be no F schools. The crowd cheered. He then handed the microphone to Lakewood Principal James Hopkins, who said that this year the school had jumped from an F to a C. Hopkins congratulated the teachers and students, and he thanked a long list of families and businesses that supported the school. The progress was possible, Hopkins said in an interview, because those families and businesses helped pay for tutoring programs, bus transportation and a positive

behavior program, while, every day, Duke students volunteered as tutors. The community lined up behind Lakewood, a school that in 2017 was at risk of being handed over to a charter school by the state. The reputation of Durham’s school system has long cast a shadow over the city’s sustained rise, pushing some parents toward charter and private schools, and potentially siphoning employees from companies seeking to hire talent. Lakewood’s drastic improvement, however, serves as both a model for other schools and businesses, and as an early result of plans DPS has already put in place. In January, Mubenga released a five-year strategic plan to change the system’s reputation, a plan that relies on a strong partnership at the school, parent and teacher level, and on a larger community engagement, especially with business leaders. School officials and business leaders express optimism about the district, in large part because they agree they depend on each other. Mubenga, a former DPS math teacher at Chewning Middle School in the late ’90s, returned

to the system two years ago knowing it faced significant challenges. The district has a total proficiency rate of 49%, and a 40-percentage point gap between the rates of white students and black and Hispanic students. Thirty percent of kids in Durham County don’t attend DPS schools, and half of white students do not. The strategic plan does not try to hide from these numbers,and its goals are not meek. By the end of five years, the plan intends to raise total proficiency rates to 60%, to reduce suspensions, to reduce teacher turnover and to ensure that 90%of all schools meet or exceed state standards for year-to-year academic growth. The responsibility for fulfilling these intentions, the plan makes clear, goes far beyond the school system. “Durham Public Schools must be intentional in acting collaboratively and involving all stakeholders, ensuring that our community utilizes its collective resources to support every child,” the plan states. “The Durham community shares responsibility with DPS for the success of our children.” The plan, for example, calls for an official community partner

Dr. Pascal Mubenga was appointed superintendent in late November 2017. He was previously superintendent of Franklin County Schools in Louisburg, North Carolina. Before that position, Dr. Mubenga served as a district transformation coach, a school transformation team leader and school transformation coach with the North Carolina Department of Public Instruction for four years. He has also served as a principal, assistant principal and classroom teacher in other North Carolina districts, including three years as a math teacher in Durham. Dr. Mubenga earned his Ph.D. from Capella University in 2007.

for every school. Lakewood Elementary teamed with Duke University, the YMCA and KBI Biopharma. As more businesses “join forces with us,” Mubenga said, “I think it’s going to be a win-win for all of us.” So far, the effort has shown promise. As of the 14th day of school, DPS had 32,993 students enrolled, an increase of 555 students from 2018. “That’s a very encouraging sign, because we did not see