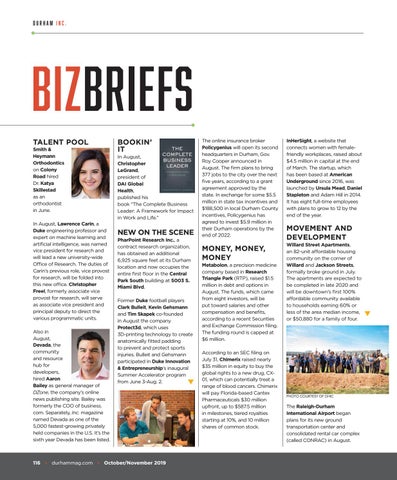 NEW ON THE SCENE PharPoint Research Inc., a contract research organization, has obtained an additional 6,925 square feet at its Durham location and now occupies the entire first floor in the Central Park South building at 5003 S. Miami Blvd.

Also in August, Devada, the community and resource hub for developers, hired Aaron Bailey as general manager of DZone, the company’s online news publishing site. Bailey was formerly the COO of business. com. Separately, Inc. magazine named Devada as one of the 5,000 fastest-growing privately held companies in the U.S. It’s the sixth year Devada has been listed.

In August, Christopher LeGrand, president of DAI Global Health, published his book “The Complete Business Leader: A Framework for Impact in Work and Life.”

The online insurance broker Policygenius will open its second headquarters in Durham, Gov. Roy Cooper announced in August. The firm plans to bring 377 jobs to the city over the next five years, according to a grant agreement approved by the state. In exchange for some $5.5 million in state tax incentives and $188,500 in local Durham County incentives, Policygenius has agreed to invest $5.9 million in their Durham operations by the end of 2022.

InHerSight, a website that connects women with femalefriendly workplaces, raised about $4.5 million in capital at the end of March. The startup, which has been based at American Underground since 2016, was launched by Ursula Mead, Daniel Stapleton and Adam Hill in 2014. It has eight full-time employees with plans to grow to 12 by the end of the year.

Willard Street Apartments, an 82-unit affordable housing community on the corner of Willard and Jackson Streets, formally broke ground in July. The apartments are expected to be completed in late 2020 and will be downtown’s first 100% affordable community available to households earning 60% or less of the area median income, or $50,880 for a family of four.

Metabolon, a precision medicine company based in Research Triangle Park (RTP), raised $1.5 million in debt and options in August. The funds, which came from eight investors, will be put toward salaries and other compensation and benefits, according to a recent Securities and Exchange Commission filing. The funding round is capped at $6 million. According to an SEC filing on July 31, Chimerix raised nearly $35 million in equity to buy the global rights to a new drug, CX01, which can potentially treat a range of blood cancers. Chimerix will pay Florida-based Cantex Pharmaceuticals $30 million upfront, up to $587.5 million in milestones, tiered royalties starting at 10%, and 10 million shares of common stock.

In August, Lawrence Carin, a Duke engineering professor and expert on machine learning and artificial intelligence, was named vice president for research and will lead a new university-wide Office of Research. The duties of Carin’s previous role, vice provost for research, will be folded into this new office. Christopher Freel, formerly associate vice provost for research, will serve as associate vice president and principal deputy to direct the various programmatic units.