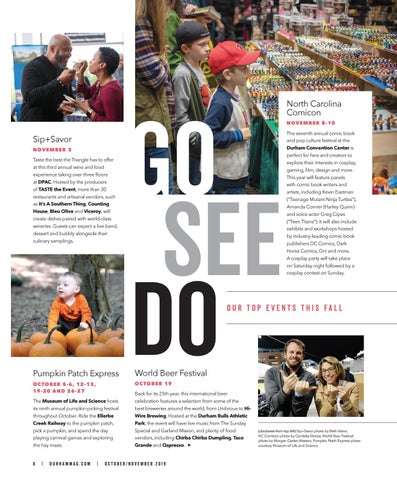 at this third annual wine and food experience taking over three floors at DPAC. Hosted by the producers of TASTE the Event, more than 30 restaurants and artisanal vendors, such as It’s A Southern Thing, Counting House, Bleu Olive and Viceroy, will create dishes paired with world-class wineries. Guests can expect a live band, dessert and bubbly alongside their culinary samplings.

OCTOBER 5 -6 , 1 2 - 1 3 , 19-2 0 AND 2 6 -2 7 The Museum of Life and Science hosts its ninth annual pumpkin-picking festival throughout October. Ride the Ellerbe Creek Railway to the pumpkin patch, pick a pumpkin, and spend the day playing carnival games and exploring the hay maze. 8

Back for its 25th year, this international beer celebration features a selection from some of the best breweries around the world, from Unibroue to HiWire Brewing. Hosted at the Durham Bulls Athletic Park, the event will have live music from The Sunday Special and Garland Mason, and plenty of food vendors, including Chirba Chirba Dumpling, Taco Grande and Qspresso. 