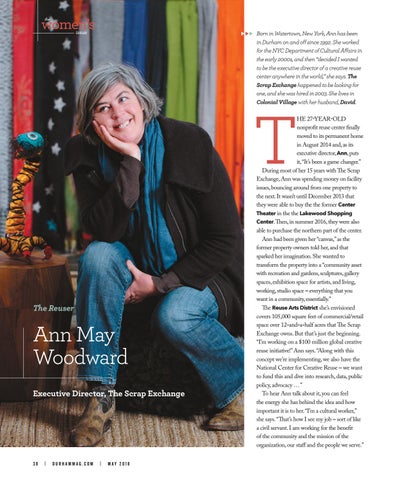 Born in Watertown, New York, Ann has been in Durham on and off since 1992. She worked for the NYC Department of Cultural Affairs in the early 2000s, and then “decided I wanted to be the executive director of a creative reuse center anywhere in the world,” she says. The Scrap Exchange happened to be looking for one, and she was hired in 2003. She lives in Colonial Village with her husband, David.

HE 27-YEAR-OLD nonprofit reuse center finally moved to its permanent home in August 2014 and, as its executive director, Ann, puts it, “It’s been a game changer.” During most of her 15 years with The Scrap Exchange, Ann was spending money on facility issues, bouncing around from one property to the next. It wasn’t until December 2013 that they were able to buy the the former Center Theater in the the Lakewood Shopping Center. Then, in summer 2016, they were also able to purchase the northern part of the center. Ann had been given her “canvas,” as the former property owners told her, and that sparked her imagination. She wanted to transform the property into a “community asset with recreation and gardens, sculptures, gallery spaces, exhibition space for artists, and living, working, studio space – everything that you want in a community, essentially.” The Reuse Arts District she’s envisioned covers 105,000 square feet of commercial/retail space over 12-and-a-half acres that The Scrap Exchange owns. But that’s just the beginning. “I’m working on a $100 million global creative reuse initiative!” Ann says. “Along with this concept we’re implementing, we also have the National Center for Creative Reuse – we want to fund this and dive into research, data, public policy, advocacy … ” To hear Ann talk about it, you can feel the energy she has behind the idea and how important it is to her. “I’m a cultural worker,” she says. “That’s how I see my job – sort of like a civil servant. I am working for the benefit of the community and the mission of the organization, our staff and the people we serve.”