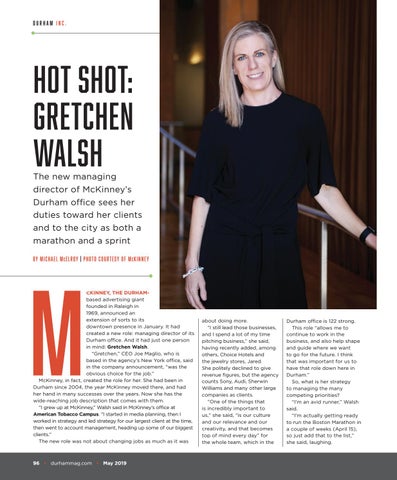 based advertising giant founded in Raleigh in 1969, announced an extension of sorts to its downtown presence in January. It had created a new role: managing director of its Durham office. And it had just one person in mind: Gretchen Walsh. “Gretchen,” CEO Joe Maglio, who is based in the agency’s New York office, said in the company announcement, “was the obvious choice for the job.” McKinney, in fact, created the role for her. She had been in Durham since 2004, the year McKinney moved there, and had her hand in many successes over the years. Now she has the wide-reaching job description that comes with them. “I grew up at McKinney,” Walsh said in McKinney’s office at American Tobacco Campus. “I started in media planning, then I worked in strategy and led strategy for our largest client at the time, then went to account management, heading up some of our biggest clients.” The new role was not about changing jobs as much as it was

about doing more. “I still lead those businesses, and I spend a lot of my time pitching business,” she said, having recently added, among others, Choice Hotels and the jewelry stores, Jared. She politely declined to give revenue figures, but the agency counts Sony, Audi, Sherwin Williams and many other large companies as clients. “One of the things that is incredibly important to us,” she said, “is our culture and our relevance and our creativity, and that becomes top of mind every day” for the whole team, which in the

Durham office is 122 strong. This role “allows me to continue to work in the business, and also help shape and guide where we want to go for the future. I think that was important for us to have that role down here in Durham.” So, what is her strategy to managing the many competing priorities? “I’m an avid runner,” Walsh said. “I’m actually getting ready to run the Boston Marathon in a couple of weeks (April 15), so just add that to the list,” she said, laughing.