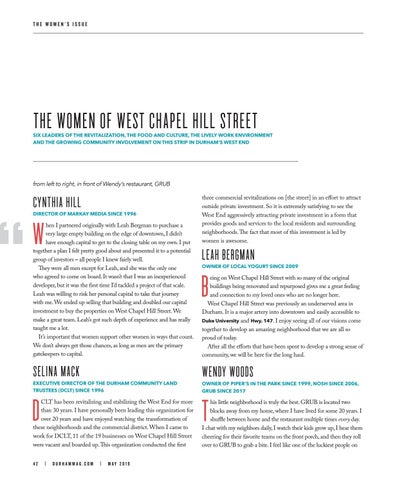 SIX LEADERS OF THE REVITALIZATION, THE FOOD AND CULTURE, THE LIVELY WORK ENVIRONMENT AND THE GROWING COMMUNITY INVOLVEMENT ON THIS STRIP IN DURHAM’S WEST END

from left to right, in front of Wendy’s restaurant, GRUB

DIRECTOR OF MARKAY MEDIA SINCE 1996

hen I partnered originally with Leah Bergman to purchase a very large empty building on the edge of downtown, I didn’t have enough capital to get to the closing table on my own. I put together a plan I felt pretty good about and presented it to a potential group of investors – all people I knew fairly well. They were all men except for Leah, and she was the only one who agreed to come on board. It wasn’t that I was an inexperienced developer, but it was the first time I’d tackled a project of that scale. Leah was willing to risk her personal capital to take that journey with me. We ended up selling that building and doubled our capital investment to buy the properties on West Chapel Hill Street. We make a great team. Leah’s got such depth of experience and has really taught me a lot. It’s important that women support other women in ways that count. We don’t always get those chances, as long as men are the primary gatekeepers to capital.

EXECUTIVE DIRECTOR OF THE DURHAM COMMUNITY LAND TRUSTEES (DCLT) SINCE 1996

CLT has been revitalizing and stabilizing the West End for more than 30 years. I have personally been leading this organization for over 20 years and have enjoyed watching the transformation of these neighborhoods and the commercial district. When I came to work for DCLT, 11 of the 19 businesses on West Chapel Hill Street were vacant and boarded up. This organization conducted the first 42

three commercial revitalizations on [the street] in an effort to attract outside private investment. So it is extremely satisfying to see the West End aggressively attracting private investment in a form that provides goods and services to the local residents and surrounding neighborhoods. The fact that most of this investment is led by women is awesome.

OWNER OF LOCAL YOGURT SINCE 2009

eing on West Chapel Hill Street with so many of the original buildings being renovated and repurposed gives me a great feeling and connection to my loved ones who are no longer here. West Chapel Hill Street was previously an underserved area in Durham. It is a major artery into downtown and easily accessible to Duke University and Hwy. 147. I enjoy seeing all of our visions come together to develop an amazing neighborhood that we are all so proud of today. After all the efforts that have been spent to develop a strong sense of community, we will be here for the long haul.

his little neighborhood is truly the best. GRUB is located two blocks away from my home, where I have lived for some 20 years. I shuffle between home and the restaurant multiple times every day. I chat with my neighbors daily, I watch their kids grow up, I hear them cheering for their favorite teams on the front porch, and then they roll over to GRUB to grab a bite. I feel like one of the luckiest people on