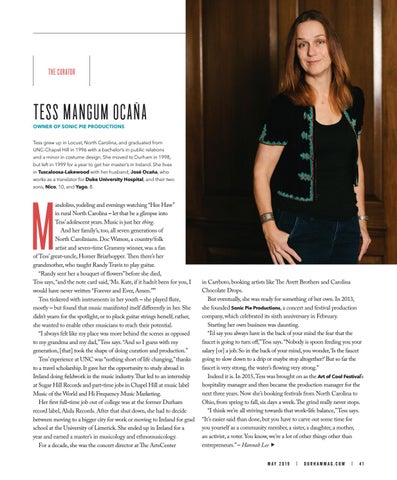 Tess grew up in Locust, North Carolina, and graduated from UNC-Chapel Hill in 1996 with a bachelor’s in public relations and a minor in costume design. She moved to Durham in 1998, but left in 1999 for a year to get her master’s in Ireland. She lives in Tuscaloosa-Lakewood with her husband, José Ocaña, who works as a translator for Duke University Hospital, and their two sons, Nico, 10, and Yago, 8.

andolins, yodeling and evenings watching “Hee Haw” in rural North Carolina – let that be a glimpse into Tess’ adolescent years. Music is just her thing. And her family’s, too, all seven generations of North Carolinians. Doc Watson, a country/folk artist and seven-time Grammy winner, was a fan of Tess’ great-uncle, Homer Briarhopper. Then there’s her grandmother, who taught Randy Travis to play guitar. “Randy sent her a bouquet of flowers” before she died, Tess says, “and the note card said, ‘Ms. Kate, if it hadn’t been for you, I would have never written “Forever and Ever, Amen.”’” Tess tinkered with instruments in her youth – she played flute, mostly – but found that music manifested itself differently in her. She didn’t yearn for the spotlight, or to pluck guitar strings herself; rather, she wanted to enable other musicians to reach their potential. “I always felt like my place was more behind the scenes as opposed to my grandma and my dad,” Tess says. “And so I guess with my generation, [that] took the shape of doing curation and production.” Tess’ experience at UNC was “nothing short of life changing,” thanks to a travel scholarship. It gave her the opportunity to study abroad in Ireland doing fieldwork in the music industry. That led to an internship at Sugar Hill Records and part-time jobs in Chapel Hill at music label Music of the World and Hi Frequency Music Marketing. Her first full-time job out of college was at the former Durham record label, Alula Records. After that shut down, she had to decide between moving to a bigger city for work or moving to Ireland for grad school at the University of Limerick. She ended up in Ireland for a year and earned a master’s in musicology and ethnomusicology. For a decade, she was the concert director at The ArtsCenter

in Carrboro, booking artists like The Avett Brothers and Carolina Chocolate Drops. But eventually, she was ready for something of her own. In 2013, she founded Sonic Pie Productions, a concert and festival production company, which celebrated its sixth anniversary in February. Starting her own business was daunting. “I’d say you always have in the back of your mind the fear that the faucet is going to turn off,” Tess says. “Nobody is spoon feeding you your salary [or] a job. So in the back of your mind, you wonder, ‘Is the faucet going to slow down to a drip or maybe stop altogether?’ But so far the faucet is very strong, the water’s flowing very strong.” Indeed it is. In 2015, Tess was brought on as the Art of Cool Festival’s hospitality manager and then became the production manager for the next three years. Now she’s booking festivals from North Carolina to Ohio, from spring to fall, six days a week. The grind really never stops. “I think we’re all striving towards that work-life balance,” Tess says. “It’s easier said than done, but you have to carve out some time for you yourself as a community member, a sister, a daughter, a mother, an activist, a voter. You know, we’re a lot of other things other than entrepreneurs.” – Hannah Lee  m ay 2 0 1 9