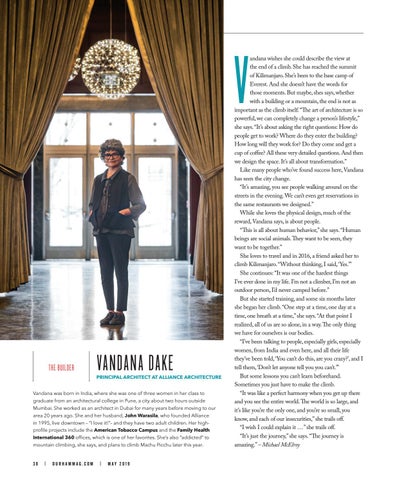 PRINCIPAL ARCHITECT AT ALLIANCE ARCHITECTURE Vandana was born in India, where she was one of three women in her class to graduate from an architectural college in Pune, a city about two hours outside Mumbai. She worked as an architect in Dubai for many years before moving to our area 20 years ago. She and her husband, John Warasila, who founded Alliance in 1995, live downtown – “I love it!”– and they have two adult children. Her highprofile projects include the American Tobacco Campus and the Family Health International 360 offices, which is one of her favorites. She’s also “addicted” to mountain climbing, she says, and plans to climb Machu Picchu later this year. 38

andana wishes she could describe the view at the end of a climb. She has reached the summit of Kilimanjaro. She’s been to the base camp of Everest. And she doesn’t have the words for those moments. But maybe, shes says, whether with a building or a mountain, the end is not as important as the climb itself. “The art of architecture is so powerful, we can completely change a person’s lifestyle,” she says. “It’s about asking the right questions: How do people get to work? Where do they enter the building? How long will they work for? Do they come and get a cup of coffee? All these very detailed questions. And then we design the space. It’s all about transformation.” Like many people who’ve found success here, Vandana has seen the city change. “It’s amazing, you see people walking around on the streets in the evening. We can’t even get reservations in the same restaurants we designed.” While she loves the physical design, much of the reward, Vandana says, is about people. “This is all about human behavior,” she says. “Human beings are social animals. They want to be seen, they want to be together.” She loves to travel and in 2016, a friend asked her to climb Kilimanjaro. “Without thinking, I said, ‘Yes.’” She continues: “It was one of the hardest things I’ve ever done in my life. I’m not a climber, I’m not an outdoor person, I’d never camped before.” But she started training, and some six months later she began her climb. “One step at a time, one day at a time, one breath at a time,” she says. “At that point I realized, all of us are so alone, in a way. The only thing we have for ourselves is our bodies. “I’ve been talking to people, especially girls, especially women, from India and even here, and all their life they’ve been told, ‘You can’t do this, are you crazy?’, and I tell them, ‘Don’t let anyone tell you you can’t.’” But some lessons you can’t learn beforehand. Sometimes you just have to make the climb. “It was like a perfect harmony when you get up there and you see the entire world. The world is so large, and it’s like you’re the only one, and you’re so small, you know, and each of our insecurities,” she trails off. “I wish I could explain it … ” she trails off. “It’s just the journey,” she says. “The journey is amazing.” – Michael McElroy