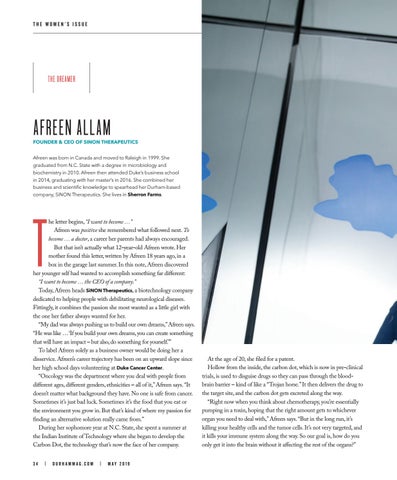 FOUNDER & CEO OF SINON THERAPEUTICS Afreen was born in Canada and moved to Raleigh in 1999. She graduated from N.C. State with a degree in microbiology and biochemistry in 2010. Afreen then attended Duke’s business school in 2014, graduating with her master’s in 2016. She combined her business and scientific knowledge to spearhead her Durham-based company, SiNON Therapeutics. She lives in Sherron Farms.

he letter begins, “I want to become …” Afreen was positive she remembered what followed next. To become … a doctor, a career her parents had always encouraged. But that isn’t actually what 12-year-old Afreen wrote. Her mother found this letter, written by Afreen 18 years ago, in a box in the garage last summer. In this note, Afreen discovered her younger self had wanted to accomplish something far different: “I want to become … the CEO of a company.” Today, Afreen heads SiNON Therapeutics, a biotechnology company dedicated to helping people with debilitating neurological diseases. Fittingly, it combines the passion she most wanted as a little girl with the one her father always wanted for her. “My dad was always pushing us to build our own dreams,” Afreen says. “He was like … ‘If you build your own dreams, you can create something that will have an impact – but also, do something for yourself.’” To label Afreen solely as a business owner would be doing her a disservice. Afreen’s career trajectory has been on an upward slope since her high school days volunteering at Duke Cancer Center. “Oncology was the department where you deal with people from different ages, different genders, ethnicities – all of it,” Afreen says. “It doesn’t matter what background they have. No one is safe from cancer. Sometimes it’s just bad luck. Sometimes it’s the food that you eat or the environment you grow in. But that’s kind of where my passion for finding an alternative solution really came from.” During her sophomore year at N.C. State, she spent a summer at the Indian Institute of Technology where she began to develop the Carbon Dot, the technology that’s now the face of her company. 34

At the age of 20, she filed for a patent. Hollow from the inside, the carbon dot, which is now in pre-clinical trials, is used to disguise drugs so they can pass through the bloodbrain barrier – kind of like a “Trojan horse.” It then delivers the drug to the target site, and the carbon dot gets excreted along the way. “Right now when you think about chemotherapy, you’re essentially pumping in a toxin, hoping that the right amount gets to whichever organ you need to deal with,” Afreen says. “But in the long run, it’s killing your healthy cells and the tumor cells. It’s not very targeted, and it kills your immune system along the way. So our goal is, how do you only get it into the brain without it affecting the rest of the organs?”