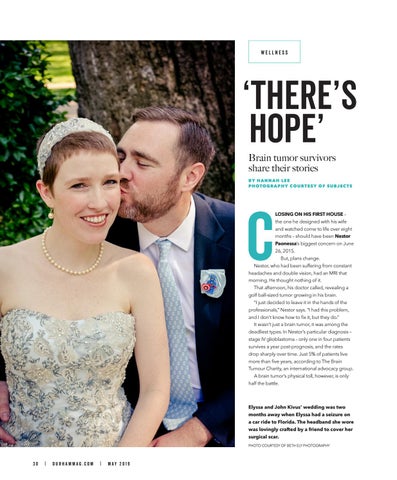 LOSING ON HIS FIRST HOUSE – the one he designed with his wife and watched come to life over eight months – should have been Nestor Paonessa’s biggest concern on June 26, 2015. But, plans change. Nestor, who had been suffering from constant headaches and double vision, had an MRI that morning. He thought nothing of it. That afternoon, his doctor called, revealing a golf ball-sized tumor growing in his brain. “I just decided to leave it in the hands of the professionals,” Nestor says. “I had this problem, and I don't know how to fix it, but they do.” It wasn’t just a brain tumor, it was among the deadliest types. In Nestor’s particular diagnosis – stage IV glioblastoma – only one in four patients survives a year post-prognosis, and the rates drop sharply over time. Just 5% of patients live more than five years, according to The Brain Tumour Charity, an international advocacy group. A brain tumor’s physical toll, however, is only half the battle.

Elyssa and John Kivus’ wedding was two months away when Elyssa had a seizure on a car ride to Florida. The headband she wore was lovingly crafted by a friend to cover her surgical scar. PHOTO COURTESY OF BETH ELY PHOTOGRAPHY