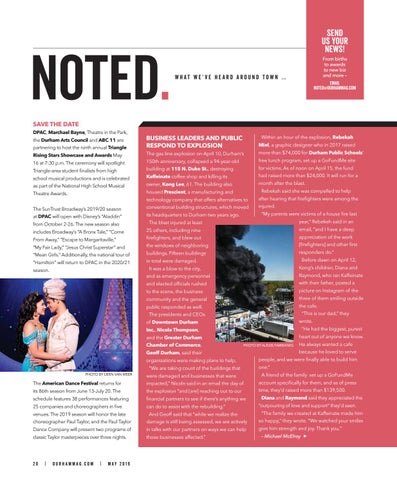 Send us your news! From births to awards to new biz and more –

Miel, a graphic designer who in 2017 raised

school musical productions and is celebrated

Kaffeinate coffee shop and killing its

housed Prescient, a manufacturing and

the Durham Arts Council and ABC 11 are

Within an hour of the explosion, Rebekah

Rising Stars Showcase and Awards May

for victims. As of noon on April 15, the fund

as part of the National High School Musical

month after the blast.

technology company that offers alternatives to

after hearing that firefighters were among the

Rebekah said she was compelled to help

“My parents were victims of a house fire last

at DPAC will open with Disney’s “Aladdin”

its headquarters to Durham two years ago.

email, “and I have a deep

the windows of neighboring

[firefighters] and other first

in total were damaged.

The blast injured at least

year,” Rebekeh said in an

From Away,” “Escape to Margaritaville,”

firefighters, and blew out

appreciation of the work

from October 2-26. The new season also

Before dawn on April 12,

It was a blow to the city,

and as emergency personnel

to the scene, the business

and the Greater Durham

heart out of anyone we know.

with their father, posted a

community and the general

three of them smiling outside “This is our dad,” they

The presidents and CEOs

“He had the biggest, purest

The American Dance Festival returns for

“We are taking count of the buildings that

were damaged and businesses that were

impacted,” Nicole said in an email the day of

He always wanted a cafe

because he loved to serve

people, and we were finally able to build him one.”

A friend of the family set up a GoFundMe

the explosion “and [are] reaching out to our

can do to assist with the rebuilding.”

damage is still being assessed, we are actively

so happy,” they wrote. “We watched your smiles

venues. The 2019 season will honor the late

in talks with our partners on ways we can help

give him strength and joy. Thank you.” – Michael McElroy