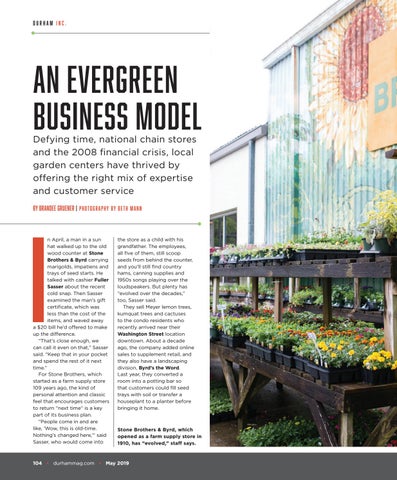 n April, a man in a sun hat walked up to the old wood counter at Stone Brothers & Byrd carrying marigolds, impatiens and trays of seed starts. He talked with cashier Fuller Sasser about the recent cold snap. Then Sasser examined the man’s gift certificate, which was less than the cost of the items, and waved away a $20 bill he’d offered to make up the difference. “That’s close enough, we can call it even on that,” Sasser said. “Keep that in your pocket and spend the rest of it next time.” For Stone Brothers, which started as a farm supply store 109 years ago, the kind of personal attention and classic feel that encourages customers to return “next time” is a key part of its business plan. “People come in and are like, ‘Wow, this is old-time. Nothing’s changed here,’” said Sasser, who would come into

the store as a child with his grandfather. The employees, all five of them, still scoop seeds from behind the counter, and you’ll still find country hams, canning supplies and 1950s songs playing over the loudspeakers. But plenty has “evolved over the decades,” too, Sasser said. They sell Meyer lemon trees, kumquat trees and cactuses to the condo residents who recently arrived near their Washington Street location downtown. About a decade ago, the company added online sales to supplement retail, and they also have a landscaping division, Byrd’s the Word. Last year, they converted a room into a potting bar so that customers could fill seed trays with soil or transfer a houseplant to a planter before bringing it home.

Stone Brothers & Byrd, which opened as a farm supply store in 1910, has “evolved,” staff says.