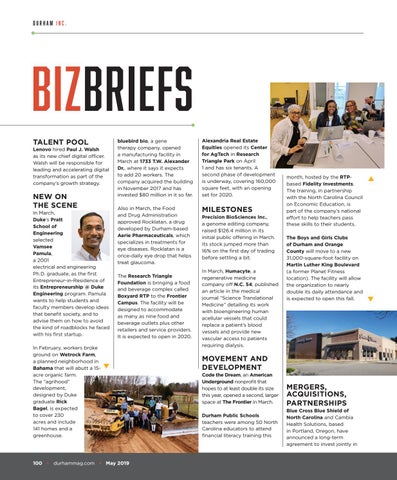 Lenovo hired Paul J. Walsh as its new chief digital officer. Walsh will be responsible for leading and accelerating digital transformation as part of the company’s growth strategy.

Also in March, the Food and Drug Administration approved Rocklatan, a drug developed by Durham-based Aerie Pharmaceuticals, which specializes in treatments for eye diseases. Rocklatan is a once-daily eye drop that helps treat glaucoma.

The Research Triangle Foundation is bringing a food and beverage complex called Boxyard RTP to the Frontier Campus. The facility will be designed to accommodate as many as nine food and beverage outlets plus other retailers and service providers. It is expected to open in 2020.

In February, workers broke ground on Wetrock Farm, a planned neighborhood in Bahama that will abutt a 15acre organic farm. The “agrihood” development, designed by Duke graduate Rick Bagel, is expected to cover 230 acres and include 141 homes and a greenhouse.

Alexandria Real Estate Equities opened its Center for AgTech in Research Triangle Park on April 1 and has six tenants. A second phase of development is underway, covering 160,000 square feet, with an opening set for 2020.

Precision BioSciences Inc., a genome editing company, raised $126.4 million in its initial public offering in March. Its stock jumped more than 16% on the first day of trading before settling a bit. In March, Humacyte, a regenerative medicine company off N.C. 54, published an article in the medical journal “Science Translational Medicine” detailing its work with bioengineering human acellular vessels that could replace a patient’s blood vessels and provide new vascular access to patients requiring dialysis.

month, hosted by the RTPbased Fidelity Investments. The training, in partnership with the North Carolina Council on Economic Education, is part of the company’s national effort to help teachers pass these skills to their students. The Boys and Girls Clubs of Durham and Orange County will move to a new 31,000-square-foot facility on Martin Luther King Boulevard (a former Planet Fitness location). The facility will allow the organization to nearly double its daily attendance and is expected to open this fall.

Code the Dream, an American Underground nonprofit that hopes to at least double its size this year, opened a second, larger space at The Frontier in March. Durham Public Schools teachers were among 50 North Carolina educators to attend financial literacy training this

Blue Cross Blue Shield of North Carolina and Cambia Health Solutions, based in Portland, Oregon, have announced a long-term agreement to invest jointly in

In March, Duke’s Pratt School of Engineering selected Vamsee Pamula, a 2001 electrical and engineering Ph.D. graduate, as the first Entrepreneur-in-Residence of its Entrepreneurship @ Duke Engineering program. Pamula wants to help students and faculty members develop ideas that benefit society, and to advise them on how to avoid the kind of roadblocks he faced with his first startup.

bluebird bio, a gene therapy company, opened a manufacturing facility in March at 1733 T.W. Alexander Dr., where it says it expects to add 20 workers. The company acquired the building in November 2017 and has invested $80 million in it so far.