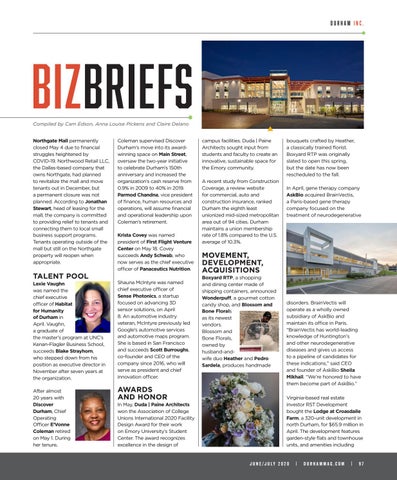 BIZBRIEFS Northgate Mall permanently closed May 4 due to financial struggles heightened by COVID-19. Northwood Retail LLC, the Dallas-based company that owns Northgate, had planned to revitalize the mall and move tenants out in December, but a permanent closure was not planned. According to Jonathan Stewart, head of leasing for the mall, the company is committed to providing relief to tenants and connecting them to local small business support programs. Tenants operating outside of the mall but still on the Northgate property will reopen when appropriate.

Lexie Vaughn was named the chief executive officer of Habitat for Humanity of Durham in April. Vaughn, a graduate of the master’s program at UNC’s Kenan-Flagler Business School, succeeds Blake Strayhorn, who stepped down from his position as executive director in November after seven years at the organization. After almost 20 years with Discover Durham, Chief Operating Officer E’Vonne Coleman retired on May 1. During her tenure,

Coleman supervised Discover Durham’s move into its awardwinning space on Main Street, oversaw the two-year initiative to celebrate Durham’s 150th anniversary and increased the organization’s cash reserve from 0.9% in 2009 to 40% in 2019. Parmod Chandna, vice president of finance, human resources and operations, will assume financial and operational leadership upon Coleman’s retirement. Krista Covey was named president of First Flight Venture Center on May 18. Covey succeeds Andy Schwab, who now serves as the chief executive officer of Panaceutics Nutrition. Shauna McIntyre was named chief executive officer of Sense Photonics, a startup focused on advancing 3D sensor solutions, on April 8. An automotive industry veteran, McIntyre previously led Google’s automotive services and automotive maps program. She is based in San Francisco and succeeds Scott Burroughs, co-founder and CEO of the company since 2016, who will serve as president and chief innovation officer.

In May, Duda | Paine Architects won the Association of College Unions International 2020 Facility Design Award for their work on Emory University’s Student Center. The award recognizes excellence in the design of

campus facilities. Duda | Paine Architects sought input from students and faculty to create an innovative, sustainable space for the Emory community. A recent study from Construction Coverage, a review website for commercial, auto and construction insurance, ranked Durham the eighth least unionized mid-sized metropolitan area out of 94 cities. Durham maintains a union membership rate of 1.8% compared to the U.S. average of 10.3%.

bouquets crafted by Heather, a classically trained florist. Boxyard RTP was originally slated to open this spring, but the date has now been rescheduled to the fall. In April, gene therapy company AskBio acquired BrainVectis, a Paris-based gene therapy company focused on the treatment of neurodegenerative

disorders. BrainVectis will operate as a wholly owned subsidiary of AskBio and maintain its office in Paris. “BrainVectis has world-leading knowledge of Huntington’s and other neurodegenerative diseases and gives us access to a pipeline of candidates for these indications,” said CEO and founder of AskBio Sheila Mikhail. “We’re honored to have them become part of AskBio.” Virginia-based real estate investor RST Development bought the Lodge at Croasdaile Farm, a 320-unit development in north Durham, for $65.9 million in April. The development features garden-style flats and townhouse units, and amenities including