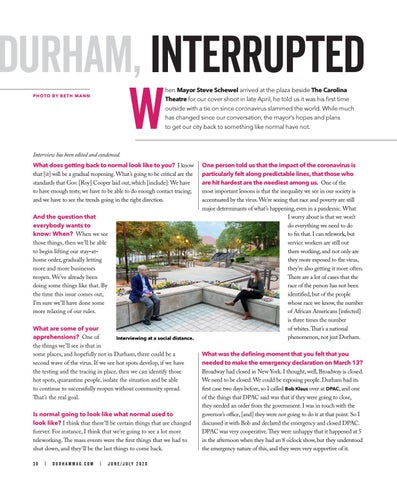 hen Mayor Steve Schewel arrived at the plaza beside The Carolina Theatre for our cover shoot in late April, he told us it was his first time outside with a tie on since coronavirus slammed the world. While much has changed since our conversation, the mayor’s hopes and plans to get our city back to something like normal have not.

Interview has been edited and condensed.

What does getting back to normal look like to you? I know that [it] will be a gradual reopening. What’s going to be critical are the standards that Gov. [Roy] Cooper laid out, which [include]: We have to have enough tests; we have to be able to do enough contact tracing; and we have to see the trends going in the right direction. And the question that everybody wants to know: When? When we see those things, then we’ll be able to begin lifting our stay-athome order, gradually letting more and more businesses reopen. We’ve already been doing some things like that. By the time this issue comes out, I’m sure we’ll have done some more relaxing of our rules. What are some of your apprehensions? One of Interviewing at a social distance. the things we’ll see is that in some places, and hopefully not in Durham, there could be a second wave of the virus. If we see hot spots develop, if we have the testing and the tracing in place, then we can identify those hot spots, quarantine people, isolate the situation and be able to continue to successfully reopen without community spread. That’s the real goal. Is normal going to look like what normal used to look like? I think that there’ll be certain things that are changed forever. For instance, I think that we’re going to see a lot more teleworking. The mass events were the first things that we had to shut down, and they’ll be the last things to come back. 30

One person told us that the impact of the coronavirus is particularly felt along predictable lines, that those who are hit hardest are the neediest among us. One of the most important lessons is that the inequality we see in our society is accentuated by the virus. We’re seeing that race and poverty are still major determinants of what’s happening, even in a pandemic. What I worry about is that we won’t do everything we need to do to fix that. I can telework, but service workers are still out there working, and not only are they more exposed to the virus, they’re also getting it more often. There are a lot of cases that the race of the person has not been identified, but of the people whose race we know, the number of African Americans [infected] is three times the number of whites. That’s a national phenomenon, not just Durham. What was the defining moment that you felt that you needed to make the emergency declaration on March 13? Broadway had closed in New York. I thought, well, Broadway is closed. We need to be closed. We could be exposing people. Durham had its first case two days before, so I called Bob Klaus over at DPAC, and one of the things that DPAC said was that if they were going to close, they needed an order from the government. I was in touch with the governor’s office, [and] they were not going to do it at that point. So I discussed it with Bob and declared the emergency and closed DPAC. DPAC was very cooperative. They were unhappy that it happened at 5 in the afternoon when they had an 8 o’clock show, but they understood the emergency nature of this, and they were very supportive of it.