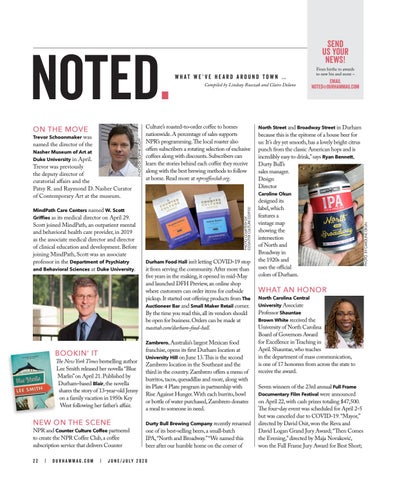 noted. named the director of the Nasher Museum of Art at Duke University in April.

Trevor was previously the deputy director of curatorial affairs and the Patsy R. and Raymond D. Nasher Curator of Contemporary Art at the museum.

Culture’s roasted-to-order coffee to homes nationwide. A percentage of sales supports NPR’s programming. The local roaster also offers subscribers a rotating selection of exclusive coffees along with discounts. Subscribers can learn the stories behind each coffee they receive along with the best brewing methods to follow at home. Read more at nprcoffeeclub.org.

it from serving the community. After more than five years in the making, it opened in mid-May and launched DFH Preview, an online shop where customers can order items for curbside pickup. It started out offering products from The Auctioneer Bar and Small Maker Retail corner. By the time you read this, all its vendors should be open for business. Orders can be made at toasttab.com/durham-food-hall. Zambrero, Australia’s largest Mexican food

because this is the epitome of a house beer for us: It’s dry yet smooth, has a lovely bright citrus punch from the classic American hops and is incredibly easy to drink,” says Ryan Bennett, Durty Bull’s sales manager. Design Director Caroline Okun

Scott joined MindPath, an outpatient mental and behavioral health care provider, in 2019 as the associate medical director and director of clinical education and development. Before joining MindPath, Scott was an associate professor in the Department of Psychiatry and Behavioral Sciences at Duke University.

franchise, opens its first Durham location at University Hill on June 13. This is the second Zambrero location in the Southeast and the third in the country. Zambrero offers a menu of burritos, tacos, quesadillas and more, along with its Plate 4 Plate program in partnership with Rise Against Hunger. With each burrito, bowl or bottle of water purchased, Zambrero donates a meal to someone in need. Durty Bull Brewing Company recently renamed

one of its best-selling beers, a small-batch IPA, “North and Broadway.” “We named this beer after our humble home on the corner of

designed its label, which features a vintage map showing the intersection of North and Broadway in the 1920s and uses the official colors of Durham.

University of North Carolina Board of Governors Award for Excellence in Teaching in April. Shauntae, who teaches in the department of mass communication, is one of 17 honorees from across the state to receive the award. Seven winners of the 23rd annual Full Frame Documentary Film Festival were announced

on April 22, with cash prizes totaling $47,500. The four-day event was scheduled for April 2-5 but was canceled due to COVID-19. “Mayor,” directed by David Osit, won the Reva and David Logan Grand Jury Award; “Then Comes the Evening,” directed by Maja Novaković, won the Full Frame Jury Award for Best Short;