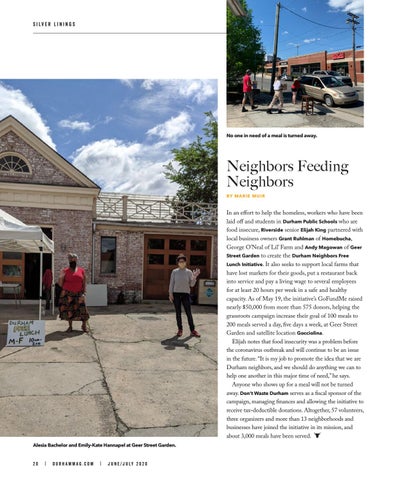 No one in need of a meal is turned away.

In an effort to help the homeless, workers who have been laid off and students in Durham Public Schools who are food insecure, Riverside senior Elijah King partnered with local business owners Grant Ruhlman of Homebucha, George O’Neal of Lil’ Farm and Andy Magowan of Geer Street Garden to create the Durham Neighbors Free Lunch Initiative. It also seeks to support local farms that have lost markets for their goods, put a restaurant back into service and pay a living wage to several employees for at least 20 hours per week in a safe and healthy capacity. As of May 19, the initiative’s GoFundMe raised nearly $50,000 from more than 575 donors, helping the grassroots campaign increase their goal of 100 meals to 200 meals served a day, five days a week, at Geer Street Garden and satellite location Gocciolina. Elijah notes that food insecurity was a problem before the coronavirus outbreak and will continue to be an issue in the future. “It is my job to promote the idea that we are Durham neighbors, and we should do anything we can to help one another in this major time of need,” he says. Anyone who shows up for a meal will not be turned away. Don’t Waste Durham serves as a fiscal sponsor of the campaign, managing finances and allowing the initiative to receive tax-deductible donations. Altogether, 57 volunteers, three organizers and more than 13 neighborhoods and businesses have joined the initiative in its mission, and about 3,000 meals have been served.