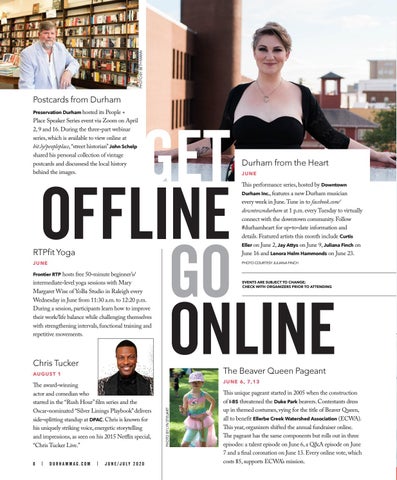 Place Speaker Series event via Zoom on April 2, 9 and 16. During the three-part webinar series, which is available to view online at bit.ly/peopleplace, “street historian” John Schelp shared his personal collection of vintage postcards and discussesd the local history behind the images.

This performance series, hosted by Downtown Durham Inc., features a new Durham musician every week in June. Tune in to facebook.com/ downtowndurham at 1 p.m. every Tuesday to virtually connect with the downtown community. Follow #durhamheart for up-to-date information and details. Featured artists this month include Curtis Eller on June 2, Jay Attys on June 9, Juliana Finch on June 16 and Lenora Helm Hammonds on June 23.

intermediate-level yoga sessions with Mary Margaret Wise of YoBa Studio in Raleigh every Wednesday in June from 11:30 a.m. to 12:20 p.m. During a session, participants learn how to improve their work/life balance while challenging themselves with strengthening intervals, functional training and repetitive movements.

EVENTS ARE SUBJECT TO CHANGE; CHECK WITH ORGANIZERS PRIOR TO ATTENDING

The award-winning actor and comedian who starred in the “Rush Hour” film series and the Oscar-nominated “Silver Linings Playbook” delivers side-splitting standup at DPAC. Chris is known for his uniquely striking voice, energetic storytelling and impressions, as seen on his 2015 Netflix special, “Chris Tucker Live.”

This unique pageant started in 2005 when the construction of I-85 threatened the Duke Park beavers. Contestants dress up in themed costumes, vying for the title of Beaver Queen, all to benefit Ellerbe Creek Watershed Association (ECWA). This year, organizers shifted the annual fundraiser online. The pageant has the same components but rolls out in three episodes: a talent episode on June 6, a Q&A episode on June 7 and a final coronation on June 13. Every online vote, which costs $5, supports ECWA’s mission.