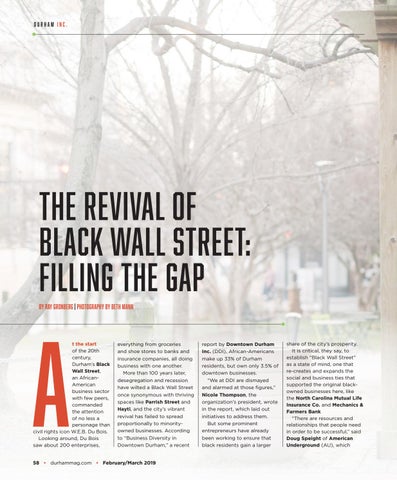 THE REVIVAL OF BLACK WALL STREET: FILLING THE GAP BY RAY GRONBERG | PHOTOGRAPHY BY BETH MANN

t the start of the 20th century, Durham’s Black Wall Street, an AfricanAmerican business sector with few peers, commanded the attention of no less a personage than civil rights icon W.E.B. Du Bois. Looking around, Du Bois saw about 200 enterprises,

everything from groceries and shoe stores to banks and insurance companies, all doing business with one another. More than 100 years later, desegregation and recession have wilted a Black Wall Street once synonymous with thriving spaces like Parrish Street and Hayti, and the city’s vibrant revival has failed to spread proportionally to minorityowned businesses. According to “Business Diversity in Downtown Durham,” a recent

report by Downtown Durham Inc. (DDI), African-Americans make up 33% of Durham residents, but own only 3.5% of downtown businesses. “We at DDI are dismayed and alarmed at those figures,” Nicole Thompson, the organization’s president, wrote in the report, which laid out initiatives to address them. But some prominent entrepreneurs have already been working to ensure that black residents gain a larger

share of the city’s prosperity. It is critical, they say, to establish “Black Wall Street” as a state of mind, one that re-creates and expands the social and business ties that supported the original blackowned businesses here, like the North Carolina Mutual Life Insurance Co. and Mechanics & Farmers Bank “There are resources and relationships that people need in order to be successful,” said Doug Speight of American Underground (AU), which