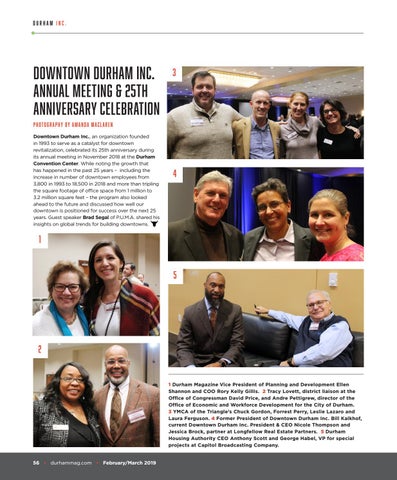 P H O T O G R A P H Y BY A M A N D A M A C L A R E N Downtown Durham Inc., an organization founded in 1993 to serve as a catalyst for downtown revitalization, celebrated its 25th anniversary during its annual meeting in November 2018 at the Durham Convention Center. While noting the growth that has happened in the past 25 years – including the increase in number of downtown employees from 3,800 in 1993 to 18,500 in 2018 and more than tripling the square footage of office space from 1 million to 3.2 million square feet – the program also looked ahead to the future and discussed how well our downtown is positioned for success over the next 25 years. Guest speaker Brad Segal of P.U.M.A. shared his insights on global trends for building downtowns.