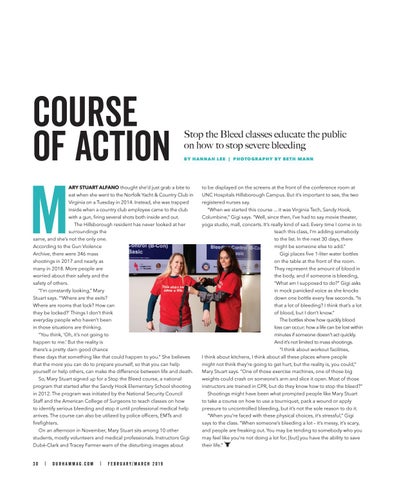 ARY STUART ALFANO thought she’d just grab a bite to eat when she went to the Norfolk Yacht & Country Club in Virginia on a Tuesday in 2014. Instead, she was trapped inside when a country club employee came to the club with a gun, firing several shots both inside and out. The Hillsborough resident has never looked at her surroundings the same, and she’s not the only one. According to the Gun Violence Archive, there were 346 mass shootings in 2017 and nearly as many in 2018. More people are worried about their safety and the safety of others. “I’m constantly looking,” Mary Stuart says. “‘Where are the exits? Where are rooms that lock? How can they be locked?’ Things I don’t think everyday people who haven’t been in those situations are thinking. “You think, ‘Oh, it’s not going to happen to me.’ But the reality is there’s a pretty darn good chance these days that something like that could happen to you.” She believes that the more you can do to prepare yourself, so that you can help yourself or help others, can make the difference between life and death. So, Mary Stuart signed up for a Stop the Bleed course, a national program that started after the Sandy Hook Elementary School shooting in 2012. The program was initiated by the National Security Council Staff and the American College of Surgeons to teach classes on how to identify serious bleeding and stop it until professional medical help arrives. The course can also be utilized by police officers, EMTs and firefighters. On an afternoon in November, Mary Stuart sits among 10 other students, mostly volunteers and medical professionals. Instructors Gigi Dubé-Clark and Tracey Farmer warn of the disturbing images about 30

to be displayed on the screens at the front of the conference room at UNC Hospitals Hillsborough Campus. But it’s important to see, the two registered nurses say. “When we started this course ... it was Virginia Tech, Sandy Hook, Columbine,” Gigi says. “Well, since then, I’ve had to say movie theater, yoga studio, mall, concerts. It’s really kind of sad. Every time I come in to teach this class, I’m adding somebody to the list. In the next 30 days, there might be someone else to add.” Gigi places five 1-liter water bottles on the table at the front of the room. They represent the amount of blood in the body, and if someone is bleeding, “What am I supposed to do?” Gigi asks in mock panicked voice as she knocks down one bottle every few seconds. “Is that a lot of bleeding? I think that’s a lot of blood, but I don’t know.” The bottles show how quickly blood loss can occur; how a life can be lost within minutes if someone doesn’t act quickly. And it’s not limited to mass shootings. “I think about workout facilities, I think about kitchens, I think about all these places where people might not think they’re going to get hurt, but the reality is, you could,” Mary Stuart says. “One of those exercise machines, one of those big weights could crash on someone’s arm and slice it open. Most of those instructors are trained in CPR, but do they know how to stop the bleed?” Shootings might have been what prompted people like Mary Stuart to take a course on how to use a tourniquet, pack a wound or apply pressure to uncontrolled bleeding, but it’s not the sole reason to do it. “When you’re faced with these physical choices, it’s stressful,” Gigi says to the class. “When someone’s bleeding a lot – it’s messy, it’s scary, and people are freaking out. You may be tending to somebody who you may feel like you’re not doing a lot for, [but] you have the ability to save their life.”