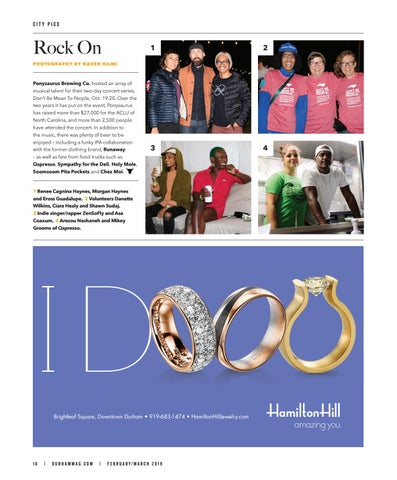 Ponysaurus Brewing Co. hosted an array of musical talent for their two-day concert series, Don’t Be Mean To People, Oct. 19-20. Over the two years it has put on the event, Ponysaurus has raised more than $27,000 for the ACLU of North Carolina, and more than 2,500 people have attended the concert. In addition to the music, there was plenty of beer to be enjoyed – including a funky IPA collaboration with the former clothing brand, Runaway – as well as fare from food trucks such as Qspresso, Sympathy for the Deli, Holy Mole, Soomsoom Pita Pockets and Chez Moi. 1 Renee Cagnina Haynes, Morgan Haynes and Eross Guadalupe. 2 Volunteers Danette Wilkins, Ciara Healy and Shawn Sudaj. 3 Indie singer/rapper ZenSoFly and Asa Coaxum. 4 Arezou Neshaneh and Mikey Grooms of Qspresso.