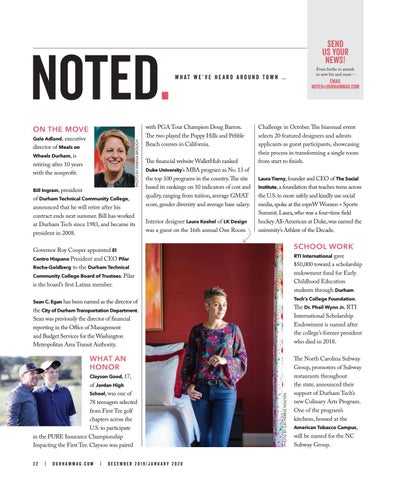 noted. ON THE MOVE PHOTO BY BRIANA BROUGH

director of Meals on Wheels Durham, is retiring after 10 years with the nonprofit. Bill Ingram, president

of Durham Technical Community College, announced that he will retire after his contract ends next summer. Bill has worked at Durham Tech since 1983, and became its president in 2008.

with PGA Tour Champion Doug Barron. The two played the Poppy Hills and Pebble Beach courses in California. The financial website WalletHub ranked Duke University’s MBA program as No. 13 of the top 100 programs in the country. The site based its rankings on 10 indicators of cost and quality, ranging from tuition, average GMAT score, gender diversity and average base salary. Interior designer Laura Koshel of LK Design was a guest on the 16th annual One Room

Laura Tierny, founder and CEO of The Social

Institute, a foundation that teaches teens across

the U.S. to more safely and kindly use social media, spoke at the espnW Women + Sports Summit. Laura, who was a four-time field hockey All-American at Duke, was named the university’s Athlete of the Decade.

Sean C. Egan has been named as the director of

the City of Durham Transportation Department. Sean was previously the director of financial reporting in the Office of Management and Budget Services for the Washington Metropolitan Area Transit Authority.

Challenge in October. The biannual event selects 20 featured designers and admits applicants as guest participants, showcasing their process in transforming a single room from start to finish.

of Jordan High School, was one of 78 teenagers selected from First Tee golf chapters across the U.S. to participate in the PURE Insurance Championship Impacting the First Tee. Clayson was paired

The North Carolina Subway Group, promoters of Subway restaurants throughout the state, announced their support of Durham Tech’s new Culinary Arts Program. One of the program’s kitchens, housed at the American Tobacco Campus, will be named for the NC Subway Group.