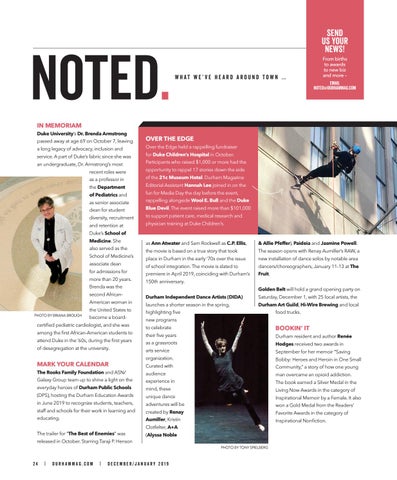 From births to awards to new biz and more – Email noted@durhammag.com

passed away at age 69 on October 7, leaving

service. A part of Duke’s fabric since she was

for Duke Children’s Hospital in October.

a long legacy of advocacy, inclusion and

Over the Edge held a rappelling fundraiser

an undergraduate, Dr. Armstrong’s most

Participants who raised $1,000 or more had the

opportunity to rappel 17 stories down the side

Editorial Assistant Hannah Lee joined in on the

rappelling alongside Wool E. Bull and the Duke

as a professor in

fun for Media Day the day before the event,

as Ann Atwater and Sam Rockwell as C.P. Ellis,

place in Durham in the early ’70s over the issue

Duke’s School of also served as the

more than 20 years. Brenda was the

the United States to become a board-

certified pediatric cardiologist, and she was

among the first African-American students to attend Duke in the ’60s, during the first years of desegregation at the university.

The Rooks Family Foundation and ASN/

staff and schools for their work in learning and educating.

of school integration. The movie is slated to

The season opens with Renay Aumiller’s RAW, a dancers/choreographers, January 11-13 at The

Golden Belt will hold a grand opening party on Saturday, December 1, with 25 local artists, the

September for her memoir “Saving

Bobby: Heroes and Heroin in One Small

Community,” a story of how one young

The book earned a Silver Medal in the

Living Now Awards in the category of

Inspirational Memoir by a Female. It also

won a Gold Medal from the Readers’

Favorite Awards in the category of Inspirational Nonfiction.

The trailer for “The Best of Enemies” was

the movie is based on a true story that took