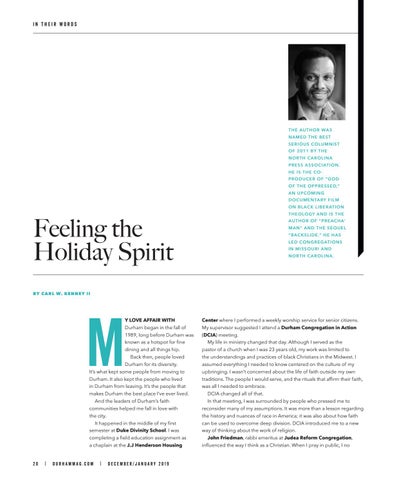 OF THE OPP RE SSE D,” AN UP COMING

Y LOVE AFFAIR WITH Durham began in the fall of 1989, long before Durham was known as a hotspot for fine dining and all things hip. Back then, people loved Durham for its diversity. It’s what kept some people from moving to Durham. It also kept the people who lived in Durham from leaving. It’s the people that makes Durham the best place I’ve ever lived. And the leaders of Durham’s faith communities helped me fall in love with the city. It happened in the middle of my first semester at Duke Divinity School. I was completing a field education assignment as a chaplain at the J.J Henderson Housing

Center where I performed a weekly worship service for senior citizens. My supervisor suggested I attend a Durham Congregation in Action (DCIA) meeting. My life in ministry changed that day. Although I served as the pastor of a church when I was 23 years old, my work was limited to the understandings and practices of black Christians in the Midwest. I assumed everything I needed to know centered on the culture of my upbringing. I wasn’t concerned about the life of faith outside my own traditions. The people I would serve, and the rituals that affirm their faith, was all I needed to embrace. DCIA changed all of that. In that meeting, I was surrounded by people who pressed me to reconsider many of my assumptions. It was more than a lesson regarding the history and nuances of race in America; it was also about how faith can be used to overcome deep division. DCIA introduced me to a new way of thinking about the work of religion. John Friedman, rabbi emeritus at Judea Reform Congregation, influenced the way I think as a Christian. When I pray in public, I no