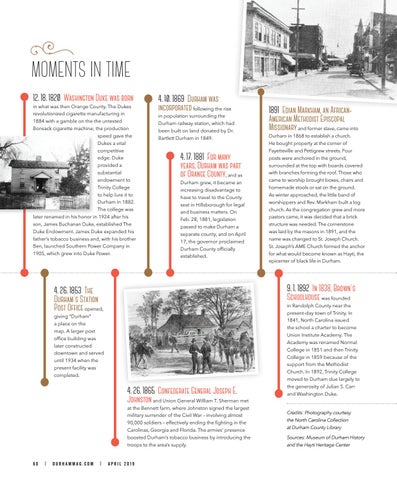 in what was then Orange County. The Dukes revolutionized cigarette manufacturing in 1884 with a gamble on the the untested Bonsack cigarette machine; the production speed gave the Dukes a vital competitive edge. Duke provided a substantial endowment to Trinity College to help lure it to Durham in 1882. The college was later renamed in his honor in 1924 after his son, James Buchanan Duke, established The Duke Endowment. James Duke expanded his father’s tobacco business and, with his brother Ben, launched Southern Power Company in 1905, which grew into Duke Power.

in population surrounding the Durham railway station, which had been built on land donated by Dr. Bartlett Durham in 1849.

Durham grew, it became an increasing disadvantage to have to travel to the County seat in Hillsborough for legal and business matters. On Feb. 28, 1881, legislation passed to make Durham a separate county, and on April 17, the governor proclaimed Durham County officially established.

giving “Durham” a place on the map. A larger post office building was later constructed downtown and served until 1934 when the present facility was completed.

at the Bennett farm, where Johnston signed the largest military surrender of the Civil War – involving almost 90,000 soldiers – effectively ending the fighting in the Carolinas, Georgia and Florida. The armies’ presence boosted Durham’s tobacco business by introducing the troops to the area’s supply. |

Durham in 1868 to establish a church. He bought property at the corner of Fayetteville and Pettigrew streets. Four posts were anchored in the ground, surrounded at the top with boards covered with branches forming the roof. Those who came to worship brought boxes, chairs and homemade stools or sat on the ground. As winter approached, the little band of worshippers and Rev. Markham built a log church. As the congregation grew and more pastors came, it was decided that a brick structure was needed. The cornerstone was laid by the masons in 1891, and the name was changed to St. Joseph Church. St. Joseph’s AME Church formed the anchor for what would become known as Hayti, the epicenter of black life in Durham.

in Randolph County near the present-day town of Trinity. In 1841, North Carolina issued the school a charter to become Union Institute Academy. The Academy was renamed Normal College in 1851 and then Trinity College in 1859 because of the support from the Methodist Church. In 1892, Trinity College moved to Durham due largely to the generosity of Julian S. Carr and Washington Duke. Credits: Photography courtesy the North Carolina Collection at Durham County Library Sources: Museum of Durham History and the Hayti Heritage Center