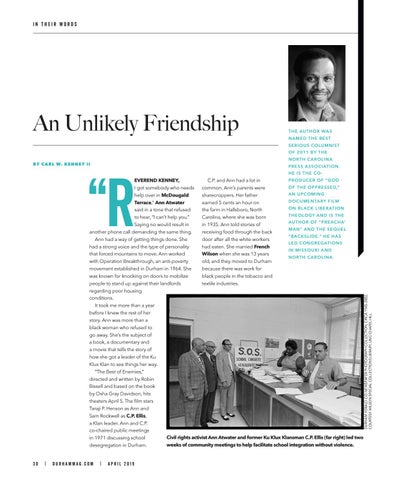 P RODUCE R O F “ G O D EVEREND KENNEY, C.P. and Ann had a lot in OF THE OPP RE SSE D,” I got somebody who needs common. Ann’s parents were AN UP COMING help over in McDougald sharecroppers. Her father DOCUME NTA RY F IL M Terrace,” Ann Atwater earned 5 cents an hour on ON BLACK L IB E RAT IO N said in a tone that refused the farm in Hallsboro, North THE OLOGY A ND IS T H E to hear, “I can’t help you.” Carolina, where she was born AUTHOR O F “ P RE AC H A’ Saying no would result in in 1935. Ann told stories of MAN “ AN D T H E SE QUE L another phone call demanding the same thing. receiving food through the back “BACK S LID E .” H E H A S Ann had a way of getting things done. She door after all the white workers LE D CON G RE G AT IO NS had a strong voice and the type of personality had eaten. She married French IN MIS S OURI A ND that forced mountains to move. Ann worked Wilson when she was 13 years N ORTH CA RO L INA . with Operation Breakthrough, an anti-poverty old, and they moved to Durham movement established in Durham in 1964. She because there was work for was known for knocking on doors to mobilize black people in the tobacco and people to stand up against their landlords textile industries. regarding poor housing conditions. It took me more than a year before I knew the rest of her story. Ann was more than a black woman who refused to go away. She’s the subject of a book, a documentary and a movie that tells the story of how she got a leader of the Ku Klux Klan to see things her way. “The Best of Enemies,” directed and written by Robin Bissell and based on the book by Osha Gray Davidson, hits theaters April 5. The film stars Taraji P. Henson as Ann and Sam Rockwell as C.P. Ellis, a Klan leader. Ann and C.P. co-chaired public meetings Civil rights activist Ann Atwater and former Ku Klux Klansman C.P. Ellis (far right) led two in 1971 discussing school weeks of community meetings to help facilitate school integration without violence. desegregation in Durham.