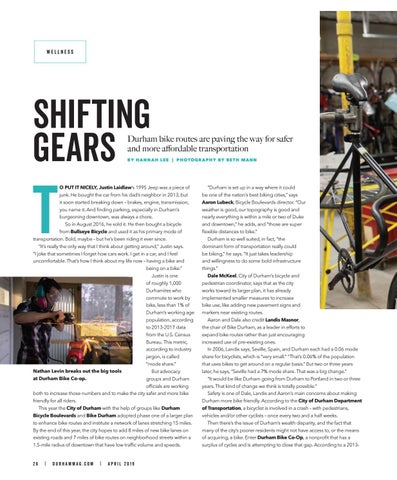 O PUT IT NICELY, Justin Laidlaw’s 1995 Jeep was a piece of junk. He bought the car from his dad’s neighbor in 2013, but it soon started breaking down – brakes, engine, transmission, you name it. And finding parking, especially in Durham’s burgeoning downtown, was always a chore. So in August 2016, he sold it. He then bought a bicycle from Bullseye Bicycle and used it as his primary mode of transportation. Bold, maybe – but he’s been riding it ever since. “It’s really the only way that I think about getting around,” Justin says. “I joke that sometimes I forget how cars work. I get in a car, and I feel uncomfortable. That’s how I think about my life now – having a bike and being on a bike.” Justin is one of roughly 1,000 Durhamites who commute to work by bike, less than 1% of Durham’s working age population, according to 2013-2017 data from the U.S. Census Bureau. This metric, according to industry jargon, is called “mode share.” Nathan Levin breaks out the big tools But advocacy at Durham Bike Co-op. groups and Durham officials are working both to increase those numbers and to make the city safer and more bike friendly for all riders. This year the City of Durham with the help of groups like Durham Bicycle Boulevards and Bike Durham adopted phase one of a larger plan to enhance bike routes and institute a network of lanes stretching 15 miles. By the end of this year, the city hopes to add 8 miles of new bike lanes on existing roads and 7 miles of bike routes on neighborhood streets within a 1.5-mile radius of downtown that have low traffic volume and speeds. 26

“Durham is set up in a way where it could be one of the nation’s best biking cities,” says Aaron Lubeck, Bicycle Boulevards director. “Our weather is good, our topography is good and nearly everything is within a mile or two of Duke and downtown,” he adds, and “those are super flexible distances to bike.” Durham is so well suited, in fact, “the dominant form of transportation really could be biking,” he says. “It just takes leadership and willingness to do some bold infrastructure things.” Dale McKeel, City of Durham’s bicycle and pedestrian coordinator, says that as the city works toward its larger plan, it has already implemented smaller measures to increase bike use, like adding new pavement signs and markers near existing routes. Aaron and Dale also credit Landis Masnor, the chair of Bike Durham, as a leader in efforts to expand bike routes rather than just encouraging increased use of pre-existing ones. In 2006, Landis says, Seville, Spain, and Durham each had a 0.06 mode share for bicyclists, which is “very small.” “That’s 0.06% of the population that uses bikes to get around on a regular basis.” But two or three years later, he says, “Seville had a 7% mode share. That was a big change.” “It would be like Durham going from Durham to Portland in two or three years. That kind of change we think is totally possible.” Safety is one of Dale, Landis and Aaron’s main concerns about making Durham more bike friendly. According to the City of Durham Department of Transportation, a bicyclist is involved in a crash – with pedestrians, vehicles and/or other cyclists – once every two and a half weeks. Then there’s the issue of Durham’s wealth disparity, and the fact that many of the city’s poorer residents might not have access to, or the means of acquiring, a bike. Enter Durham Bike Co-Op, a nonprofit that has a surplus of cycles and is attempting to close that gap. According to a 2013-